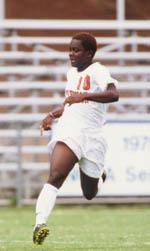 CLEMSON, SC – Clemson Lady Tiger soccer player Deliah Arrington was named the NCAA Women’s Soccer Player-of-the-Week according to the Soccer Times publication. The 5-foot-5 Pawleys Island, SC, resident started her week in style for the then-No. 4 Lady Tigers Wednesday, netting the winning goal in a 2-1 decision over top-ranked, defending NCAA champion North Carolina. For good measure, she provided two of the goals for undefeated Clemson (8-0) in a 4-0 domination of Western Carolina. The biological sciences major has five goals and four assists for 14 points in 2000 after a freshman campaign in which she led the Tigers in goals (9), game-winning goals (3) and points (25), as well as tying for the lead in assists (7). In high school, Arrington won state championships in the 100-meter hurdles. Her father Vandel was a cornerback on Clemson’s 1981 national championship football team.

Arrington also was nominated to the Soccer America Team-of-the-Week for September 11-17. She is second on the team in points and tied for first with five goals. She has led Clemson to a school record start to a season with the 8-0 start and has led the Lady Tigers to a school record ranking, with Clemson being ranked #2 in both the Soccer America poll and the NSCAA poll.