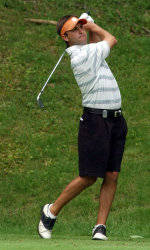 Clemson, SC – Former Clemson golfer Brent Delahoussaye finished 23rd during the PGA Tour Qualifying Tournament on Monday and earned his first PGA Tour card for the 2010 season. Former Tiger Stephen Poole finished 48th at the event and qualified for membership on the Nationwide Tour for 2010.

Delahousseye finished with a three-under-par 69 on Monday to finish the six-round event with a score of nine-under par 423. He finished on the cut number, as the top 25 performers and ties make the PGA Tour. Delahousseye had rounds of 74-71-66-68-75-69 for the 108-hole event. He finished strong on Monday by playing the final 10 holes at three under par.