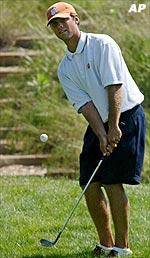 Clemson received a bid to the NCAA East Regional at the Yale University Course in New Haven, CT on Monday. It marks the 23rd consecutive year that Clemson has been invited to the NCAA Tournament, the longest streak of any sports program in Clemson history.

The regional tournament will run Thursday, May 20 through Saturday, May 22nd. The top 10 teams in the 27-team field will advance to the national championship, which will be held at The Cascades Course at The Homestead in Hot Springs, VA. Clemson will be the number-two seed in the East Regional behind number-one Florida.

Clemson’s streak of 23 straight tournament bids is second to Oklahoma State’s 58. The Cowboys were also invited to the tournament on Monday. Clemson won the championship at Oklahoma State’s home course last year, finishing two strokes better than the host school. This is Larry Penley’s 21st year as Clemson head coach and he has taken the Tigers to the NCAA National tournament all 21 years. Earlier this year Penley was inducted into the College Golf Hall of Fame. His Tigers are ranked second in the nation in the latest polls according to the Golf Coach’s Association and the Sagarin Computer rankings.

Clemson will be seeking its eighth straight top 10 finish when it begins play in the NCAA East Regional. If Clemson can finish in the top 10 it would break the school record for consecutive top 10 finishes. In addition to the Clemson golf team’s current streak, the men’s tennis program had seven straight top 10s from 1980-86 and the men’s soccer team had a seven-year streak from 1973-79.

This year’s Clemson team is coming off its best performance of the year, a championship victory in the ACC tournament, the second straight year Clemson has won that event. The Tigers have competed in 12 tournaments (11 stroke play and one match play) and finished in the top four 10 of those 12 events.

Leading the way from a stroke average standpoint is Matt Hendrix. A May 2004 graduate and native of Aiken, SC, Hendrix has a 70.83 stroke average for his 29 rounds. He has scored under par in 19 of those 29 rounds, including a team best 11 rounds in the 60s. A first-team All-ACC selection each of the last two years, Hendrix was a finalist for the 2004 Ben Hogan Award.

Jack Ferguson, a junior from Seneca, has a 71.09 stroke average this year for his 32 rounds of competition. Ferguson has been Clemson’s most consistent golfer with 10 top 20 finishes for his 11 events. He finished second at the ACC Tournament with a 206 score and third at the Atlanta Intercollegiate with a 208 total. Ferguson, a second-team All-American last year, has a 71.97 career stroke average, fourth best in Clemson history.

Gregg Jones is a third first-team All-ACC selection on this year’s team that will be competing in the NCAA regional. Jones has been a starter on each of Clemson’s last three teams and the Tigers have finished in the top three all three years. He has a chance to become the first athlete in any sport in Clemson history to play on four different top three teams. Jones has a 72.84 stroke average this year and a 72.67 average for his career.

Stephen Poole and Brian Duncan are a pair of sophomore who will be in Penley’s lineup. Poole has a 72.53 stroke average for his five tournaments this year. He has three top 10 finishes on his resume including a sixth-place finish at the ACC Tournament when he had a career best tying 210 total. Duncan has played in eight tournaments and has a 74.86 stroke average for the season. His score counted towards the team total in two of the three rounds at the ACC tournament.