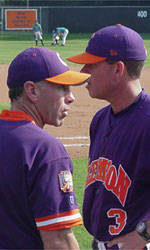 “Tim Corbin was named the top assistant coach in the nation by the ABCA last year and that speaks volumes for his respect level across the nation. His abilities on the diamond and in the area of recruiting are second to none.

“Kevin has demonstrated that he is among the top pitching coaches in the nation. We are one of just six schools to advance to the NCAA Super Regional each of the last three years and the performance of our pitching staff has had a lot to do with that success.”

This is the second promotion for Corbin since he has been at Clemson. He was named assistant head coach in 1998. All nine of his recruiting classes at Clemson have been ranked in the top 25 in the nation, including the 1999 class, which was ranked number-one. Clemson has advanced to the NCAA Tournament all eight of his previous seasons at Clemson.

O’Sullivan has been at Clemson since the 1999 season as the Tigers pitching coach. The Tigers have ranked among the national leaders in team ERA each of the last two seasons and the team had a 2.27 strikeout/walk ratio in 2001, fourth best in school history. One of his prot current senior Steve Reba, led the ACC in wins last year with a 12-3 record.