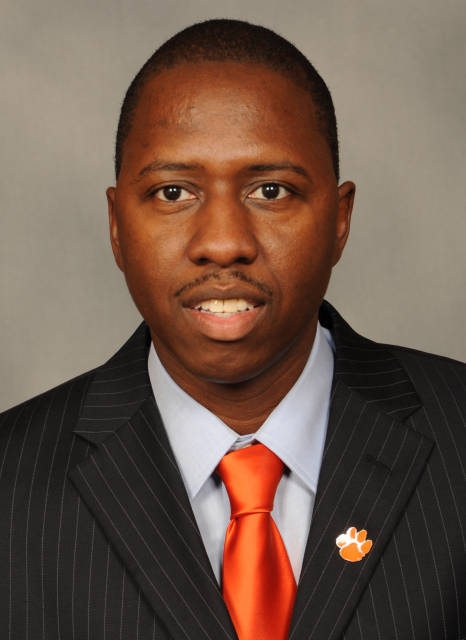 With Smith on staff, the Tigers have won at least 10 ACC regular season games in three of six seasons.

Smith coaches the Tiger wing players, and over the past few seasons he has helped spearhead the productivity displayed by two-time All-ACC forward Jaron Blossomgame and Donte Grantham. Prior to a season ending injury, Grantham was turning in a career season in 2017-18, averaging 14.2 points and 6.9 rebounds to lead the Tigers to a 16-3 start to the season.

Blossomgame led the Tigers in scoring each of his last three seasons, and was named the ACC’s Most Improved Player in 2015-16 before posting similar numbers again as a senior in 2016-17.

In 2013-14, Smith worked with first-team All-ACC forward and the ACC Defensive Player of the Year, K.J. McDaniels. He produced one of the greatest individual seasons in school history and declared early for the 2014 NBA Draft, where he is now part of the Brooklyn Nets organization.

As a team, the Tigers were 23-13 overall in Smith’s second season with the program. Clemson advanced to the NIT semifinals and upset No. 13 Duke 72-59, the largest margin of defeat all season for the Blue Devils. Statistically, Clemson ranked first in the NCAA in defending the three and in the top 10 in both scoring defense (58.4) and blocks per game (6.1).

Smith was the lead recruiter for top-75 prospect Donte Grantham, who signed with the Tigers in the fall of 2013 after a prep season at Hargrave Military Academy in Virginia. Grantham went on to become the only freshman in school history to post at least 40 threes, 40 assists, 20 steals and 20 blocks in a season.

In 2012-13, Smith had a positive impact on freshman Jordan Roper, who led the team in three-point goals, three-point percentage and steals.

Smith coached at Georgia Southern for three seasons under Charlton Young. In Statesboro, Smith was part of a coaching staff charged with leading a program in the midst of a two-year probationary period due to NCAA sanctions stemming from the previous staff. In 2011-12, Smith helped orchestrate an 11-win improvement in the regular season of the Southern Conference, the second-largest single-season turnaround in the conference’s history.

In 2011-12, the Eagles went 15-15 overall, 12-6 in the Southern Conference. Smith coached Eric Ferguson to first-team All-SoCon honors, one year after he was named to the All-Freshman Team. He also coached Willie Powers III, a first-team All-SoCon selection in 2010 and third-team performer in 2011.

Prior to three seasons in Statesboro, Smith was an assistant at USC Upstate in Spartanburg, S.C., from 2002-09. He was Eddie Payne’s top assistant from 2005-09 during the program’s transition into the Division I level. Smith helped the Spartans to two straight NCAA Tournament appearances at the Division II level in 2005 and 2006.

In 2004-05, USC Upstate went 24-8 and earned a share of the regular season championship in the Peach Belt Conference. The following season, the Spartans were 20-10 and won the PBC Tournament to again advance to the national tournament. USC Upstate moved into the Atlantic Sun Conference in 2007 for Smith’s final two years on staff.

He coached a number of individual standouts during his time with the USC Upstate program. He coached Kevin Harrington and Jay Free, two-time All-Peach Belt performers who both scored over 1,000 points in their respective playing careers. Daniel Quinlan was the Peach Belt Freshman of the Year in 2005 and PBC Tournament MVP in 2006.

He coached Bobby Davis, the Spartans’ leading career rebounder on a per game basis, for two seasons. He also coached C.J. Paul, the older brother of former Wake Forest standout and current NBA great Chris Paul, to the 1,000-point club at Upstate.

Following a two-year playing career at Morgan State, Smith enlisted in the Army and served various assignments from 1994-2000. He joined an All-Army basketball team that played year-round and traveled the country playing exhibition games.

After completing his service to the Army, he enrolled at Trinity College in 2000 and earned an undergraduate degree in information systems in 2002. He was an assistant women’s coach at Allen University in Columbia, S.C., during that time.

Smith is a native of Varnville, S.C., and was a two-time all-region player for Wade Hampton High School. He led the Red Devils to three conference championships. His second cousin, Dwight Smith, was a professional baseball player for four teams, including the Atlanta Braves, where he was a member of the franchise’s 1995 World Series team.

Smith and his wife, Fran, have three children: daughters Tayler and Karsyn, and a son, Jordan.