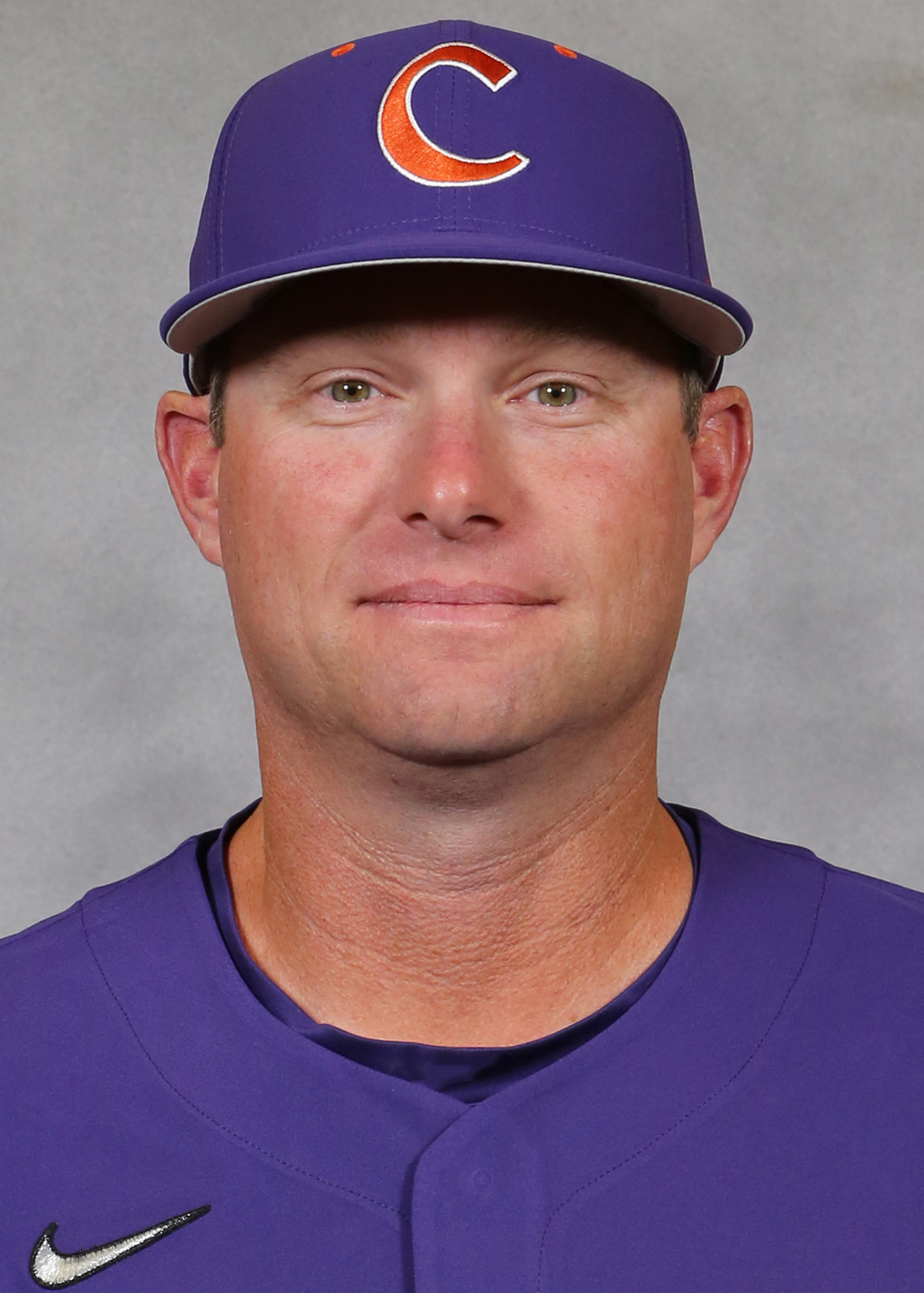 Bradley LeCroy completed his 15th year as an assistant coach with the Tiger program in 2022. He was in his second stint in Tigertown, as he served as a volunteer assistant coach at Clemson from 2003-05. LeCroy (pronounced luh-CROY) also served as recruiting coordinator and coached the infielders as well as working with the hitters. He helped lead the Tigers to the NCAA Tournament in 12 of the 14 years he was a coach at Clemson and the tournament was held.

The 2022 team had a 35-23 record and totaled 100 home runs and a .973 fielding percentage, both third highest in Tiger history. Clemson had 13 top-25 ranked wins, the most by a Tiger team since 2010, and was 5-0 against SEC teams. Max Wagner, a Dick Howser Trophy finalist, earned ACC Player-of-the-Year and first-team All-America honors by hitting .369 with 27 homers, 76 RBIs, 66 runs, an .852 slugging percentage and a .496 on-base percentage. Blake Wright earned Third-Team All-ACC honors as well.

In 2021, Clemson had a 25-27 overall record, but it was only a few wins shy of earning an NCAA Tournament berth due to playing one of the most difficult schedules in school history. Caden Grice and James Parker earned Second-Team All-ACC honors in 2021, while Grice was a freshman All-American who hit .317 with 15 homers and 53 RBIs. Parker hit a team-high .324 and was one of six Tigers selected in the draft.

The 2020 Tigers had a 14-3 record, but the season was suspended March 12 and later canceled due to a coronavirus (COVID-19) pandemic. Clemson ended the season ranked as high as No. 19 in the nation. The sophomore-laden lineup was led by sophomore Kier Meredith, who hit .364 with a .465 on-base percentage.

In 2019, the Tigers, who were 9-8 against top-25 teams and 6-3 versus top-10 teams, were selected to the NCAA Tournament. Six Tigers earned All-ACC honors, tied for most in the league, and five Tigers were drafted, including first-rounder Logan Davidson. Grayson Byrd was an All-American and First-Team All-ACC selection who totaled 16 homers. Davidson was a first-team Academic All-American, just the third in school history. He became the first Tiger in history to total both double-digit homers and double-digit steals in three different seasons.

The 2018 Tigers totaled 47 overall wins, 22 ACC regular-season victories, a share of the ACC regular-season title and an outright ACC Atlantic Division championship. Those four achievements were all firsts for the program since 2006. Clemson finished ranked as high as No. 12 in the nation by Perfect Game and was also ranked in the top 25 during all 19 weeks. Clemson was third in the nation in homers (98) and had a school-record .975 fielding percentage as well. Seth Beer (first) and Davidson (third) earned All-America honors, as Beer became just the second three-time All-American in Clemson history and was a first-round draft pick by the Houston Astros.

In 2017, the Tigers totaled 42 wins and hosted a regional. The 2017 squad was ranked in the top 10 for 10 straight weeks and finished ranked No. 22 in the coaches poll. The Tigers were also ranked in the top 25 during all 19 weeks. They totaled 73 home runs, a .381 on-base percentage and .970 fielding percentage. Reed Rohlman was a second-team All-American and First-Team All-ACC selection who batted .361 and had a 20-game hitting streak. Beer was a second-team All-American who led the team in homers (16), RBIs (53) and on-base percentage (.478).

LeCroy helped coach the 2016 team to 44 wins, the ACC championship and a top-eight national seed under first-year Head Coach Monte Lee. Clemson, who was ranked No. 15 in the final USA Today coaches poll, slugged an ACC-high 75 homers, tied for seventh most in the nation, thanks in large part to Beer, who won the Dick Howser Trophy. Beer, who batted .369 with 18 homers, 70 RBIs and a .535 on-base percentage, became the first freshman to win the award and the first freshman to be named ACC Player-of-the-Year. LeCroy also worked with first-team All-America catcher Chris Okey, who hit .339 with 15 homers and 74 RBIs. Okey was a second-round draft pick after the season.

In 2013, LeCroy’s hitters combined for an ACC-high 111 steals, most by the Tigers since 2000. Shane Kennedy and Wilkerson earned All-ACC honors, while Duggar was named a freshman All-American.

The 2012 Tigers had a league-high four offensive players earn All-ACC honors, which were the first four batters (Wilkerson, Thomas Brittle, Richie Shaffer, Phil Pohl) in the lineup during most of the season. Shaffer, who hit .336 with a .480 on-base percentage, was a first-team All-American by Perfect Game, while Brittle had a 22-game hitting streak.

LeCroy spent three seasons (2008-10) as Tennessee’s infielders coach and recruiting coordinator under Head Coach Todd Raleigh. Two of his recruiting classes (No. 23 by Collegiate Baseball in 2008 and No. 14 by Baseball America in 2009) with the Volunteers were ranked in the top 25. Before his stint in Knoxville, LeCroy served under Raleigh at Western Carolina in 2006 and 2007. Prior to his three years as the volunteer assistant coach at Clemson, LeCroy was an assistant coach at nearby Anderson (S.C.) during the 2001 and 2002 seasons.

Tennessee totaled 67 home runs in 2008, at the time the fifth-best mark in school history. A year later, he was a big reason the Volunteers slugged 87 long balls.

He led Western Carolina’s offense to heights not seen in recent history. In 2007, the Catamounts were in the top 11 in the nation in runs per game, homers per game, slugging percentage, doubles per game and batting average.

During the 2005 season, the last of his three years as the volunteer assistant at Clemson, LeCroy contributed to the Tigers’ third-consecutive NCAA Tournament appearance and a trip to the Waco (Texas) Super Regional. He was a big reason Taylor Harbin had a stellar .974 fielding percentage along with 28 doubles, 10 homers and 63 RBIs in earning second-team All-America honors as a freshman.

The 2003 season was his first coaching at Clemson. The Tigers had a .326 batting average in ACC regular-season games, the best mark in the ACC by 19 points. LeCroy coached four all-conference players in 2003, all of which comprised the Tigers’ starting infield.

During both summers in 2001 and 2002, he was the head coach of the Williamston (S.C.) American Legion team. Both teams played in the state playoffs.

LeCroy earned his bachelor’s degree in education from Clemson in May 2001. He was a three-sport star at nearby Walhalla (S.C.) High School, earning all-state honors in baseball, basketball and football.