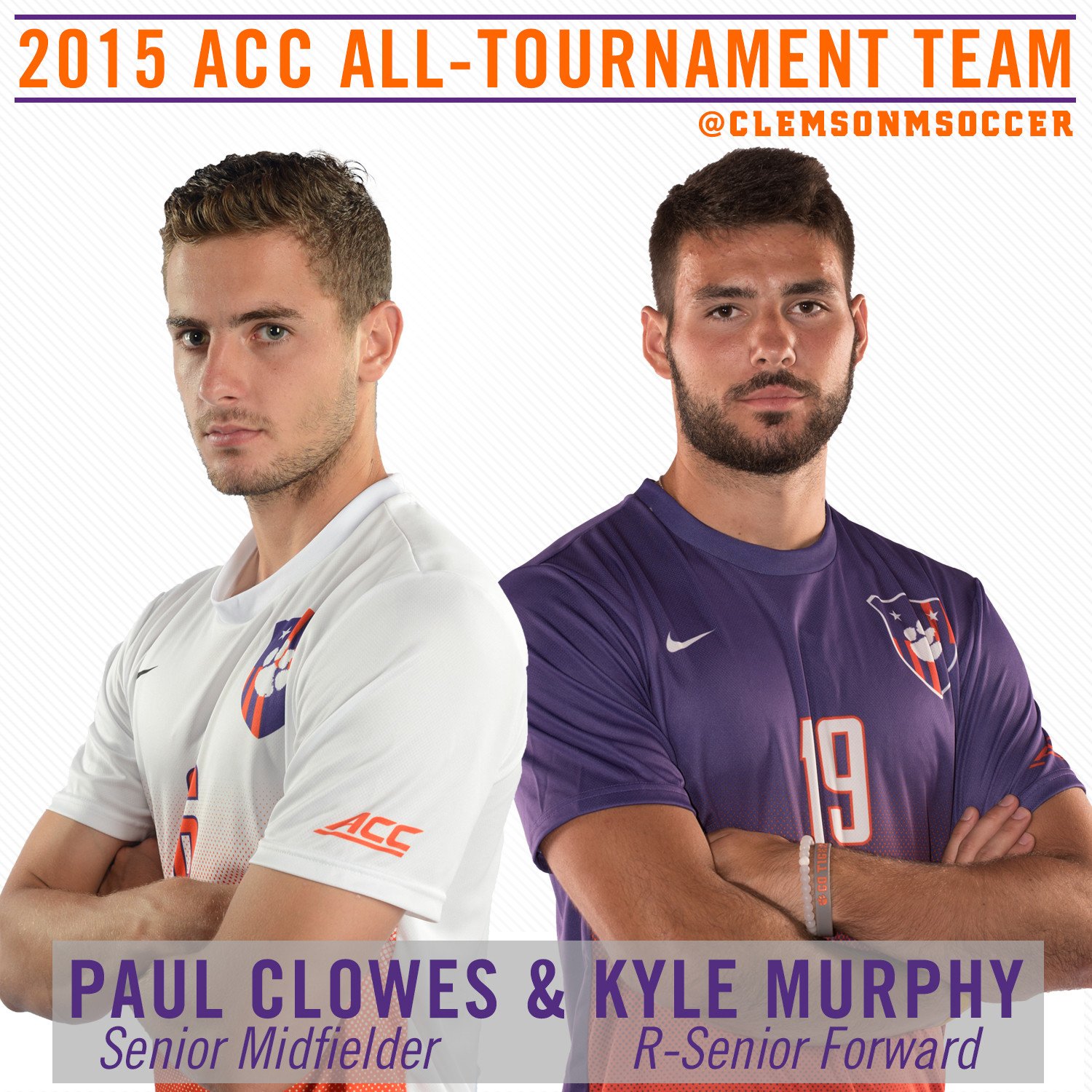 CLEMSON, S.C. – Two Clemson seniors, Paul Clowes and Kyle Murphy, were named to the 2015 ACC All-Tournament Team. The announcement was made by the conference office following Sunday’s ACC Championship game. This is the first career ACC All-Tournament team honor for Murphy, while it is the second such honor for Clowes, who was named the Most Valuable Player of the ACC Tournament in 2014.

In the 2015 ACC Tournament, the No. 3-seed Tigers defeated No. 6-seed Boston College 3-0 in a quarterfinal matchup at Historic Riggs Field on Sunday, Nov. 8. Clemson fell to No. 7-seed Syracuse 2-0 in the ACC Semifinals at Riggs on Wednesday, Nov. 11. The Orange went on to win the ACC title, as they traveled to No. 4-seed Notre Dame and secured a 1-0 victory on Sunday, Nov. 15.

Clowes played 86 minutes in the game against the Eagles, and the full 90 minutes against the Orange. As he has done all season, the co-captain from Cheshire, United Kingdom, provided consistent, solid play at the holding midfield position, a position which is often overlooked. Clowes’ maturity and communication allowed him to effectively screen the Tigers’ back line, while his passing quality, vision and tactical understanding of the game allow him to successfully organize the offensive plays in front of him.

Murphy provided a spark for the Tigers off the bench in both games. He scored one goal, on the only shot he took, in 31 minutes of play against Boston College. Against Syracuse, the forward from Red Hook, N.Y. saw 58 minutes of action off the bench, taking three shots in the contest.

On Monday, Nov. 16, Clemson learned that it is the No. 2 National Seed for the 2015 NCAA Tournament. By virtue of the national seed, the Tigers receive a first-round bye, and will host an NCAA Second Round game on Sunday, Nov. 22 at 6 p.m. at Historic Riggs Field. Clemson will face the winner of the first-round contest between Elon and Winthrop, to be played on Thursday, Nov. 19.