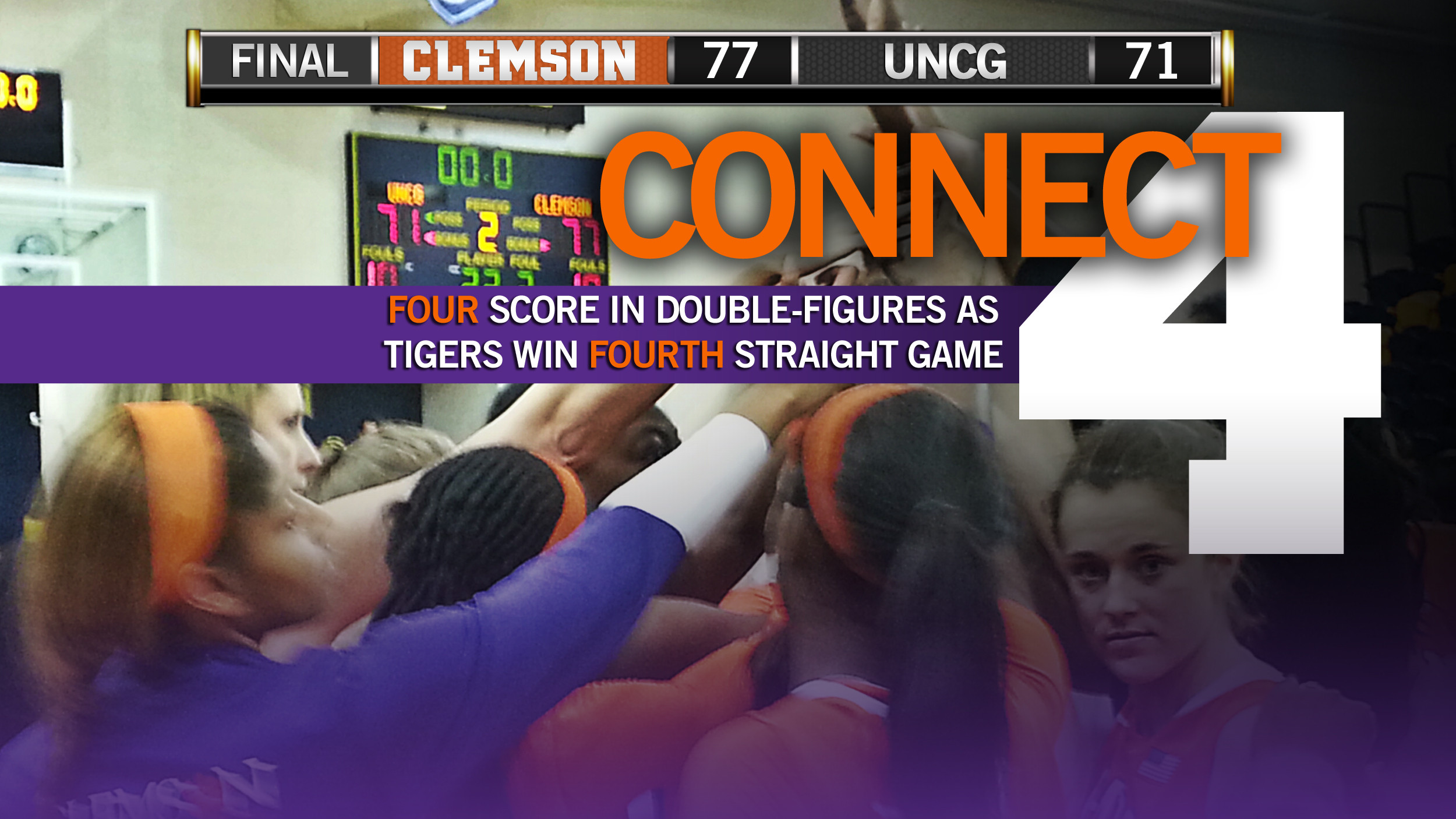 GREENSBORO, NC – The Clemson women’s basketball team won its fourth straight game with a 77-71 win at UNCG (4-4) on Thursday night in Fleming Gym. The Tigers improved to 5-3 on the year and 5-1 all-time against the Spartans. The Tigers hit 19-24 (.792) free throws and turned the ball over just four times in the second half.  Four players scored in double-figures, led by senior Quinyotta Pettaway’s 19 points on 7-9 shooting and a 5-6 mark from the line. The Tigers scored a season-high 77 points, and shot 25-48 (.521) from the floor, while holding UNCG to .407 from the floor.  The Tigers had a strong second half, building a lead by as many as 14 with 7:34 to play before holding off a furious Spartan rally.  The win is indicative of progress under first-year Head Coach Audra Smith, as this marks Clemson’s first four-game winning streak since the 2008-09 season. Two of the four wins have come on the road, and all have been by six points or fewer.  In Thursday’s contest, Clemson fought back from an early five-point deficit to take the lead with 14:15 to play in the first half. From then on, UNCG did not lead the rest of the game.  Lucy Mason had 18 of her 20 points in the second half and led the Spartans on a run to cut Clemson’s 14-point lead down to just six with 1:46 to play. Charmaine Tay, who had 15 points for the second straight game, buried a top-of-the-key jumper with 1:13 left at the end of the shot clock, which proved to be the final nail in the coffin. Clemson iced the game from the line, going 8-10 in the final minute.  Clemson went into halftime clinging to a 31-27 lead. The Tigers owned a 21-9 advantage on the glass, and limited the Spartans to just two offensive rebounds on 14 missed shots. Meanwhile, the Tigers were able to force action and go to the free throw line 11 times, and were an efficient 12-23 (.522) from the field. Twelve turnovers were costly for Clemson, who had just ten in the previous game, and twelve or fewer in three of the last four games overall.  Player of the Game: Chelsea Lindsay – The junior point guard managed the clock, and tied a career-high with 12 points, going 8-12 from the line. She also added five rebounds and three assists Stat of the Game: 4 – The number of players in double figures; The number of turnovers by Clemson in the second half; Also, the number of consecutive wins Team Notes: