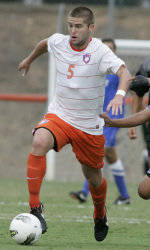 CLEMSON, SC – Ever since its three-goal loss to Duke last Friday, the Clemson men’s soccer team has worked hard at defending its penalty box.

For much of Tuesday night against 14th-ranked Charlotte, the Tigers did just that. But two breakdowns in the final eight minutes allowed two Charlotte goals, leading to a 3-1 setback at Historic Riggs Field.

“We worked on it ad nauseam in practice,” Clemson Head Coach Mike Noonan said. “You have to be assertive and aggressive. You also have to be athletic, and you also have to have maturity. Those are two things we are still a little bit behind the curve in, but it is also intestinal fortitude and courage. That’s the difference.

“That comes from every individual, and I think we had some courageous performances tonight, but collectively we can be better.”

The Tigers (1-4) did get some courageous play from Bryniar Benediktsson, Keegan Priest and Austin Savage. The three hooked up for Clemson’s lone goal, which tied the match, 1-1, at the 55:07 mark. They also got good goal play from goalkeeper Erik Mozzo and better back line play from the defense.

“As a team, we are still growing together,” Noonan said. “Cultivating things as a team is something that takes some time. Friday night’s loss, we had that coming to us. But they changed things, and they changed their approach in practice and that has been really positive.

“Tonight that showed somewhat. We were at least aggressive and assertive, but sometimes we weren’t so smart. But, for the most part we played hard.” Savage, a junior forward, says it is important that the Tigers continue to play their style and keep their concentration the whole game.

“We are young and inexperienced a little bit, but the guys are quickly learning,” he said. “They are learning fast and we need them to in order to learn the style of passing and moving, especially the movement without the ball. That is the most critical.”

There are a lot of factors that have played into the Tigers current three-game losing streak, but one thing isn’t their effort. Both Savage and Noonan expressed how hard the team is playing.

“We played hard,” Noonan said. “One of the better statistics to see in the game that most people don’t look at, and you don’t want to commit too many fouls, but if you generally have more fouls than the other team than that means you are on the front foot.

“In the first half, we did that, and against Duke we certainly didn’t. I hate to talk about style or anything, but the thing we did not do well tonight involved the choices we made in the final third. At times we could have gotten behind them, and we chose not to do that.

“We have to coach that, and get better at that because if we would have gotten behind them a couple more times we could have scored a couple more goals.” Savage says it’s all about communicating.

“We can’t switch off when we have the ball,” he said. “When we lose it in transition, we must work on finding the attackers and work on transition and the counter attacks. As an upperclassman and being on the field, it’s my job to make sure everyone is doing what they are doing and tracking back and staying switched on the entire time.”