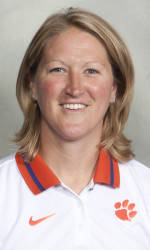 The murmur of an elated 22,848 spectators rippled through the air of Sydney Football Stadium in Sydney, Australia. The crowd had just witnessed one of the most thrilling gold medal women’s soccer matches in Olympic history. In sudden death, Norway had stunned the United States to steal a 3-2 overtime victory and gold medal from the Americans. As the Star Spangled Banner trumpeted over the loudspeakers during the medal ceremony, 22-year-old starting U.S. goalkeeper Siri Mullinix stood on the podium with mixed emotions, waiting to receive her silver medal. The elation and pride of winning the silver medal was subdued only by the omnipresent thought of the immediate loss in the back of her mind. It was a moment Siri Mullinix never forgot.

Fast-forward 12 years from Sydney, Australia to Clemson, South Carolina and you’ll see Mullinix is continuing her impact on the international soccer scene. In her second year as an assistant coach for the Clemson Tigers, Mullinix has also taken on duties as goalkeeper’s coach for the U.S. Under-18 Women’s National Team. When one looks at Mullinix’s glittering résumé, it is clearly evident the U-18 National Team would be hard pressed to find a more qualified keepers coach.

Throughout her 29 years of playing and coaching soccer, Mullinix has been the epitome of success and a champion at every turn in her career.

“My mom got me started on soccer when I was five years old. I was born in Colorado and lived there for a couple of years. When we were living out there, she saw kids playing soccer and thought, `Hey, that looks kind of cool.’ So when we moved to North Carolina, she signed me up for our local youth soccer team and the rest is history,” said Mullinix.

The decision would prove to be life changing. Her dominance as a goalkeeper from an early age was unheard of and Mullinix’s accolades are almost overwhelming when listed. On the youth level, she helped her team win the North Carolina Youth Soccer State Cup championship four times. In high school, she was named to the all-state team twice and won the North Carolina State Championship before graduating at the end of her junior year.

Taking her talents to the University of North Carolina at Chapel Hill, Mullinix gained a reputation as one of the best goalkeepers in the country. Her steely demeanor and gritty play led to four ACC Championships and back-to-back NCAA National Titles in 1996 and 1997. While at UNC, Mullinix allowed an average of 0.27 goals per game, ranking second best in school history.

In 2000, she achieved unprecedented success as goalkeeper for the U.S. National Team. Mullinix started 28 games for the national team that year, the most for a U.S. goalkeeper in history. Mullinix continued to garner achievements at a break-neck pace when she set a new record for most shutouts in a year with 15. In the 2000 Olympics, her stellar play helped power the United States to the silver medal and left no doubt she was one of the most elite goalkeepers in the world.

Upon her graduation from UNC, Mullinix played professionally for the Washington Freedom and guided the team to the Founders Cup championship in 2003, leading the WUSA in saves.

Pulling from these experiences, Mullinix now brings her incredible knowledge to the table in coaching the U.S. U-18 National Team.

“As a coach on the U-18 team, I am one of a few goalkeeper coaches to have played on the full Women’s National Team. I love being able to work with the girls and show them where to position for certain shots or crossing routes, because I was in their shoes not too long ago,” said Mullinix.

“That background helps. The feedback I am giving the players comes from my own experiences playing at that level of soccer. I know what the demands are, what players’ strengths have to be, and the mental and tactical sides of the game they need to possess. It all helps me relate to them. They know I’m not just speculating, telling them to do this and that. They know I’ve been to the top and can help prepare them to become the best.”

Along with Mullinix, the U-18 National Team has an array of superb coaches at its disposal. Their mission is well defined: develop the future of women’s soccer in the United States. The purpose of the team is to serve as a transitional period for girls who have the potential to make up the nucleus of the future U-20 National Team and represent America in the U-20 Women’s World Cup. Through international competition and team practices, the girls of the U-18 National Team are critiqued, observed, and given chances to prove their potential.

“I enjoy realizing that I am helping to train and develop the next wave of great women soccer players to represent the United States on the international and Olympic level,” remarked Mullinix. “Eight years from now, who is going to be the next Hope Solo? It is my job to help develop the goalkeepers for this U-18 National Team in the hopes that someday they may be one of the four goalkeepers competing on the national team. It’s all about constructing that next wave. The U-18 level is all about identifying, training, and developing.”

However, as with any aspect of athletic training and development, there remain challenges.

“It’s a completely different style of coaching,” noted Mullinix. “With college kids, I recruit and work with them on a daily basis for four years. With the national team, you get to work with a kid for 10 days and then you might not see them again for six months. In that respect, coaching the national team is a different process than coaching here at Clemson. You’re just trying to quickly train them, develop them and give them feedback and pointers. You do as much as you can and then they go off to their own college or high school and someone else is training them. It’s a fast and furious process.”

In 2014, Siri Mullinix’s current protégés on the U-18 National Team will be eligible to advance on to the U-20 National Team and continue to pursue their future dreams of competing for the FIFA World Cup and Olympic gold. When asked what is most rewarding about being able to help coach these promising athletes for the U-18 National Team, Mullinix did not hesitate in her response.

“I am thankful to have the opportunity to coach at such a high level and interact with highly competitive players like myself. The ability to recruit, train and build upon the potential of these young athletes is one of the reasons I coach. As a silver medalist, national champion, and former professional soccer player, I learned to have that mentality, high work ethic, and I know what it takes to be successful. I love coaching others who think along those same lines; players that are dedicated and committed to the workload it is going to take to become the best. You don’t just show up, go to practice, and become a national champion or Olympic medalist. It takes a lot of hard work, and even a lot more work when no one is looking. That’s the biggest thing I enjoy: finding players that recognize what it will take, players that are coachable, players that are willing to put in the time and work harder than anyone else. You find those types of athletes in Clemson and on the U-18 National Team. It is my hope that they’ll develop into great soccer players and great young women.”

If the past is any indicator of the future, Siri Mullinix will have prepared them to do exactly that.