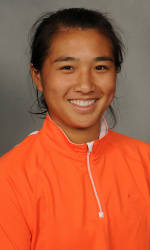 GREENSBORO, NC – Clemson sophomore Keri Wong has been named the Atlantic Coast Conference Women’s Tennis Player of the Week after helping the 10th-ranked Tigers to a pair of wins over fellow Top-20 ranked teams.

Wong, playing at No. 2 singles, scored a 6-3, 6-1 win over South Florida’s Melissa Koning and teamed with Laurianne Henry for an 8-4 win in doubles. Wong’s efforts helped the Tigers to a 6-1 victory over the No. 20 Bulls.

Two days later, Wong posted another straight set victory, winning 6-4, 6-4 over Florida State’s Francesca Segarelli. Wong also teamed with Henry for an 8-5 win over Segarelli and Noemi Scharle, clinching the doubles point for the Tigers vs. the 13th-ranked Seminoles.

The nationally 58th-ranked Wong is 13-3 in the dual match season in singles play.