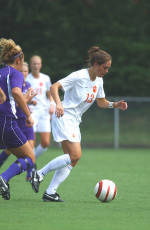 Vogel registered a goal and an assist last week for the Tigers as Clemson defeated Miami and upset No. 8 Wake Forest. In Clemson’s 2-1 win over the Hurricanes last Wednesday, Vogel got the Tigers on the board first with a goal in the 22nd minute. The freshman midfielder took a pass inside the box from Molly Franklin and deposited the ball into the left side of the net for an early 1-0 Tiger lead.

Trailing 1-0 to Wake Forest late in the second half, Vogel would register an assist as she found Meghan Smith for the game-tying goal in the 77th minute. Clemson would score again with just under five minutes remaining for a 2-1 win over the Demon Deacons. Vogel, a native of Marietta, Ga., has tallied three goals and three assists in her first season.

Vogel and the Tigers travel to Duke on Thursday before returning home to face NC State on Sunday. Both of Clemson’s matches will be featured on ACC Select.