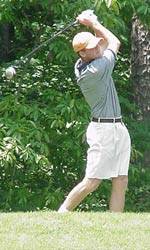 Bloomfield Hills, MI – Clemson rising senior D.J. Trahan fired a second-round 73 on Tuesday and qualified for the match play portion of the US Amateur for the second straight year. Trahan had a 67 in the first round on the North Course on Monday and his 140 total was good enough for 15th out of the 312 golfers pursuing the US Amateur title.

The event is being played at Oakland Hills in Michigan, a complex that has a pair of par 70 courses. Trahan’s day started out in disaster as he scored a nine on the par four first hole. That dropped him from fourth place to near the cutline in one hole. He finished with a six over par 41 on the front side. But, true to his championship experience, he held his composure and shot a 32 on the back side to finish with the three-over par 73 and finish in 15th place. It included an eagle on the par five 12th hole. Trahan will play his first match play round on Wednesday.

Bill Haas of Greenville, SC and a member of the Wake Forest golf team, was the top individual in stroke play with a five-under par 135. He had rounds of 67 and 68.