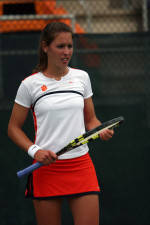 COLUMBUS, OH – Ani Mijacika, a sophomore on the Clemson women’s tennis team, has advanced to the finals of the 2007 ITA National Intercollegiate Indoor Championships, making Tiger history in the process. The native of Makarska, Croatia is the first Tiger women’s tennis player to reach the finals of the tournament, hosted this season by The Ohio State University and now in its 25th year.

Mijacika defeated sixth-ranked Kristi Miller of Georgia Tech in the quarterfinals (6-3, 2-6, 7-5) and then posted a straight-set victory of Duke’s Ellah Nze in Saturday’s semifinal action (6-1, 6-1). She is now 11-1 during the fall season, suffering her only loss in the finals of the Riviera/ITA All-American Championships in early October.

In Sunday’s title match at The Racquet Club of Columbus in Columbus, OH, she will face #119 Aurelija Miseviciute of Arkansas, who upset the nation’s #1 player in LSU’s Megan Falcon in her quarterfinal match-up.

Fans can follow the action with live updates by accessing the ITA’s homepage at www.itatennis.com. Highlights and interviews will also be webcast by Craig O’Shannessy at www.braingame.dartfishnet.com.