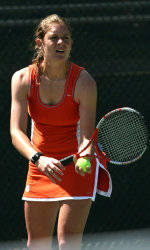 GREENSBORO, N.C. – Clemson’s Julie Coin was named the Atlantic Coast Conference Women’s Tennis Performer of the Week after leading the Tigers to a perfect weekend including two victories over conference opponents to conclude the regular season.

Coin downed a pair of ranked opponents at the number one singles flight improving her league mark to 9-1 on the season. The senior from Amiens, France defeated No. 31 Aniela Mojzis of North Carolina, 6-0, 6-4 and Duke’s Jackie Carleton, ranked 111th nationally, 6-3, 6-2.

Coin and the Tigers are back in action on Friday, April 22 at the ACC Tennis Championships in Cary, N.C. Clemson, who received the No. 3 seed in the tournament, will face the winner of Wake Forest/NC State.