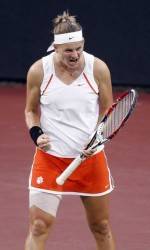 PACIFIC PALISADES, CA – Clemson’s fifth-ranked tandem of Josipa Bek and Keri Wong have advanced to the finals of the Riviera All-American Doubles Championship at the Riviera Country Club in Pacific Palisades, CA. The finals will be a battle of heavyweights, as the Tigers take on #3 Hilary Barte and Mallory Burdette of Stanford.

The match is scheduled for 2:00pm eastern on Sunday. The Riviera ITA All-American Championship is considered one of the “Grand Slam” events of collegiate tennis, along with the USTA/ITA National Indoor Championships and the NCAA Championships.

Bek and Wong have gone on an impressive run, knocking off several of the nation’s top teams. They defeated #18 Allie Will and Sofie Oyen of Florida, 8-6, in the main draw first round before dispatching #32 Kim van Ginkel and Simona Synkova of Wyoming in the second round.

They then defeated #15 Kristi Boxx and Abby Guthrie of Ole Miss, 8-4, and advanced to the finals with a tiebreak set win over #19 Ellah Nze and Nadine Fahoum of Duke, 9-8(3).

It sets up a matchup of two of the best doubles teams in the nation. Last season, Clemson fell to Stanford in the NCAA Sweet 16. During that match, the flight one singles battle, which featured Clemson’s Bek and Stanford’s Barte, was as heated a battle as there’s been all year. Both teams were ranked in the top ten and played to a tiebreak set before the match was called when Stanford other doubles teams clinched the point.

Bek played in the main draw singles, where she took on #9 Venise Chan of Washington. The Clemson junior fell in a close third set, 3-6, 6-2, 5-7. She then fell to #33 Nazari Urbina of Texas A&M in the consolation round. Bek entered the tournament ranked #13 in the nation.

In singles action, #68 Nelly Ciolkowski split a pair of matches in the Qualifying Singles Consolation round. She defeated #36 Luftiana Budiharto of Wichita State, 7-6(3), 6-3. She then fell to #78 Connor Vogel of Ole Miss.