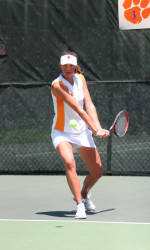 STANFORD, CA – Clemson women’s tennis player Federica van Adrichem won her first-round match-up on Wednesday afternoon at the NCAA Singles Championships at the Taube Family Tennis Center on the campus of Stanford University. The native of Amersfoort, The Netherlands defeated Emma Murphy by a score of 6-3, 6-2 for her 22nd win of the 2005-06 season. She will face the winner of Florida’s Diana Srebrovic and William & Mary’s Megan Moulton-Levy in second-round action on Thursday.

Sophomore Carol Salge also competed in singles action on Wednesday afternoon, falling to UCLA’s Riza Zalameda in a three-set battle. Zalameda claimed the first set by a score of 6-3, but Salge fought back to post a 7-6 victory in the second. Zalameda then went on to win the third set and the match, 6-2. Salge concludes her singles season as an All-ACC honoree with a 24-10 overall record. In dual match play she was 17-7 and is ranked 62nd in the most recent Fila/ITA Tennis poll.

Salge and van Adrichem will begin play in the NCAA Doubles Championships on Thursday as well. They will face Southern California’s 28th-ranked team of Dianne Matias and Carine Vermeulen. The Tiger duo enters this year’s tournament with a 12-9 record and a #19 ranking in the most recent Fila/ITA Tennis poll. They have defeated five ranked opponents during the 2006 spring season, with five of their eight losses coming against teams then-listed in the top 10.