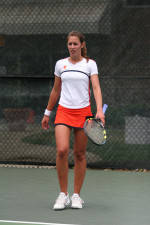 CLEMSON, SC – Clemson women’s tennis player Ani Mijacika fell on Wednesday morning in the first round of the 2007 NCAA Singles Championships, held at the Dan Magill Tennis Complex on the campus of the University of Georgia in Athens, GA. The Tiger rookie was defeated by #41 Lindsay Burdette of Stanford, 6-0, 7-6.

Mijacika concluded her singles season with a 25-7 overall record, which included a 20-3 ledger in dual matches and a run of 14 straight victories.

She will team with sophomore Federica van Adrichem in the national doubles tournament beginning on Thursday. The Clemson tandem, ranked 11th in the Fila/ITA Tennis poll, will face the #22 team of Brook Buck and Kelcy Teff from Notre Dame in the opening round. Match times will be announced later tonight after the conclusion of singles play.