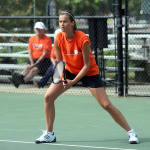 CHAPEL HILL, NC – Clemson women’s tennis players Federica van Adrichem and Daniela Alvarez will continue their runs at the ITA Southeast Regional in both doubles and singles competition on Sunday. The Tiger duo won its doubles contest over Ashlee Davis and Alexandra Hirsch of Wake Forest in the round of 16, 8-5, to improve their fall record to 8-1. They will face Duke’s 11th-ranked team of Danielle Bercek and Jessi Robinson in the quarterfinals. Alvarez and van Adrichem each also won two singles matches on Saturday to advance to the quarterfinals in the singles draw as well.

In other singles action, sophomore Carol Salge upset #9 seed Jenny Zika from Duke by a score of 7-6, 6-2 in her round of 32 match but was defeated by N.C. State’s Barbara Orlay in the round of 16, 6-2, 6-2. Junior Maria Brito’s run in the regional also ended on Saturday afternoon as she fell for the first time in the 2005 fall season in the round of 16 to 68th-ranked and fourth-seeded Jackie Charleton of Duke, 6-4, 6-3. Brito reached the final 16 with a victory over Ghizella Schutte of Tennessee in the round of 32 (6-2, 6-4).

Kathi Gerber won her first match in the consolation bracket over Charlotte’s Ashleigh Murray by a score of 6-2, 6-1, but she was defeated in the round of 16 by Sierra Poske of Wake Forest, 6-1, 6-1.