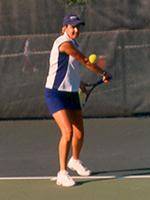 GREENSBORO, NC – Clemson women’s tennis player Alix Lacelarie was named the ACC Women’s Tennis Player of the Week. The sophomore from Villeneuve-Les-Beziers, France, earned the honor for the second time this season after defeating two higher-ranked players in the Tigers’ final two matches of the ACC regular season.

Lacelarie has upset a higher-ranked singles opponent in her last four consecutive singles matches. She has a 15-4 overall dual record in singles and is 7-1 in ACC singles play. Lacalarie is 19-1 in doubles dual matches on the season, and she and Alvarez are undefeated (15-0) in matches at flight two doubles.

The Tiger women’s tennis team returns to action this weekend, as Clemson travels to Raleigh to compete in the ACC Tournament.