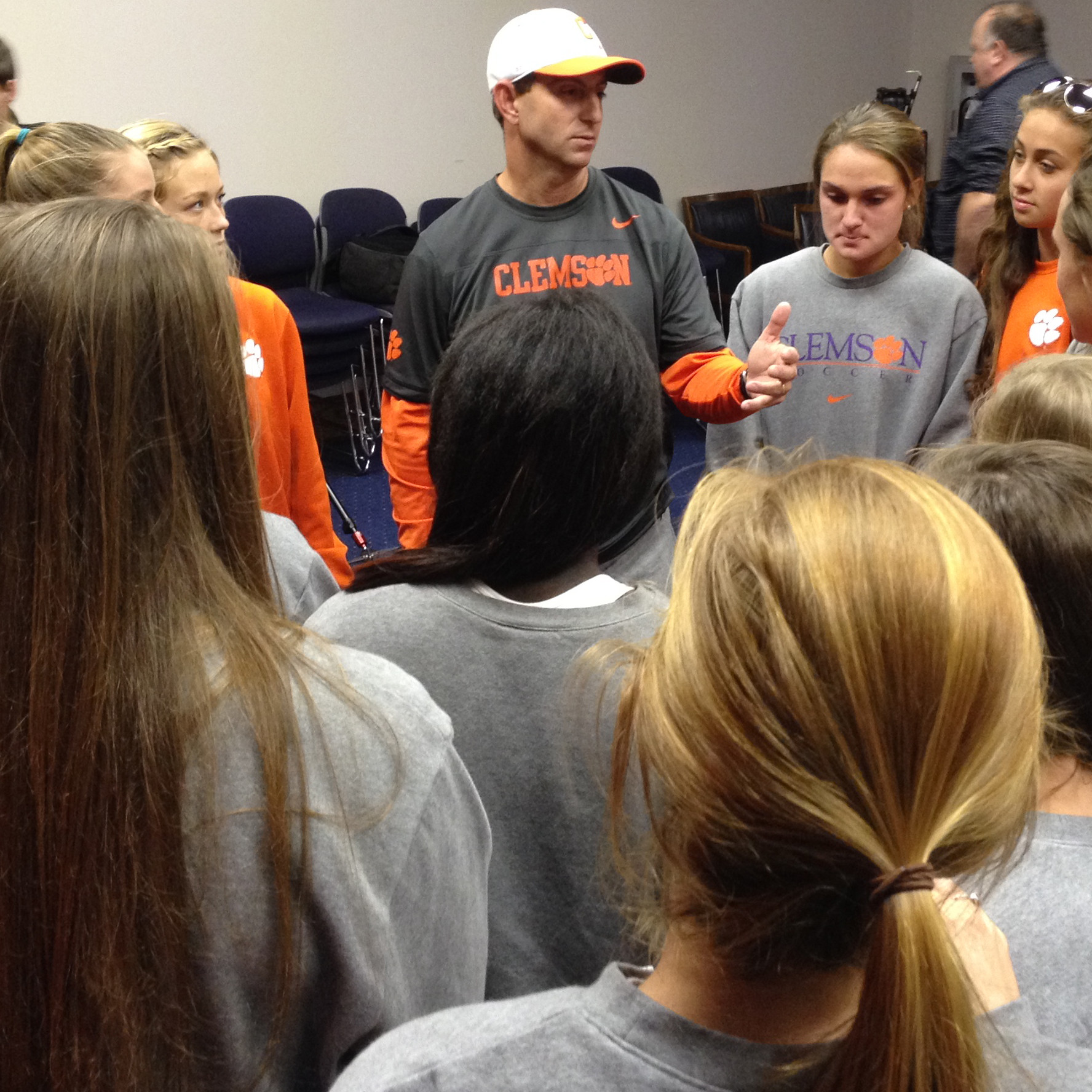 2007. That’s the last time the Clemson women’s soccer program made an NCAA Tournament appearance. And, it’s been on the minds of the 2014 team all season. When players were asked throughout the fall what the goal was for the 2014 season, they all summed it up the same. “NCAA Tournament. We just want to get back to the tournament.”  Plain as day. Simple as that. And on Nov. 10 at 4:30 p.m. they found out they had done just that.

The team watched the selection show in the McFadden team room, surrounded by fans and supporters of all kinds. The Tiger men’s soccer team was there, along with their head coach Mike Noonan and his staff. Brad Brownell and Dabo Swinney were in the house. Swinney even addressed the team, giving the team a quick pep talk before running off to practice. The women’s golf team and members of various other athletic teams and staffs came to watch the show with the team. Staff and administrators were also there to show support and excitement.

The mood started out casual and upbeat, but nerves began to sink in as the players surrounded the stage and stared at the projection screen waiting to hear “Clemson” called. Finally, in the last of the four regions, the announcer said “South Carolina will face in state rival…” and the crowed erupted. It was official. Clemson was not only in, but they would rematch with the Gamecocks in Columbia on Friday, Nov. 14. The Tigers and Gamecocks met during the regular season, on Sept. 5 at Stone Stadium in front of a record-breaking crowd. The Tigers won 1-0 in an incredibly close, incredibly physical contest. Now, we wait for Clemson vs. South Carolina, the sequel.

Excitement was all over the faces of the players, but no smiles were bigger than those of seniors Katelyn Reeve, Savannah Coiner and Morgan Campbell. It’s been a long time coming for them, especially Reeve and Coiner, who are the lone seniors that have been at Clemson four years. They have been through a lot of tough times and now are finally able to experience the good times. Everyone on the team wanted nothing more than to make the tournament, but for Reeve and Coiner it meant their hard work had paid off. The Tigers are on the right path and #ClemsonIsBack in the tournament. Now, how long the journey lasts is up to the team. But, there’s no doubt the spirit, excitement, and drive is there. Watch out world, Clemson is back and not going anywhere.