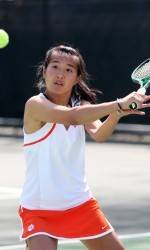 Clemson posted 7-0 victories over both Boston College and Maryland last season in Clemson. The Tigers are 27-3 all-time against the Terrapins and 4-0 against the Eagles.

The Tigers have four players ranked in this week’s Campbell/ITA Singles Rankings. Josipa Bek heads the lineup with a #24 ranking. Sophomore Keri Wong is ranked 53rd, a career-best. She is 15-3 in the dual match season, and 4-1 in ACC matches so far.

Freshman Ina Hadziselimovic moved back into the rankings at #102 for the first time since the preseason poll. She is 14-5 in the dual match season and is seeking her 20th singles win of the season against Maryland.

In doubles, the duo of Hadziselimovic and Bek is ranked #9 nationally. The duo are 16-7 overall this season, and have won four straight matches. Hadziselimovic needs five wins to tie the school mark for career victories with 100. She currently sits in third.

Hadziselimovic and Wong are also ranked #37 in doubles, as the pair notched a 9-2 mark to start the season.

The team fell to #10 this week after a #9 ranking last week. The Tigers won both of their matches over the weekend against #26 NC State and #62 Wake Forest.

After the matches with the Terrapins and Eagles. Clemson will return home to take on a pair of top-five teams in #1 North Carolina and #4 Duke on Saturday and Sunday. Those matches will be available on TigerCast.