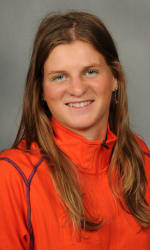 The Clemson women’s tennis team is in Chapel Hill, NC, preparing for the ITA Carolina Regional Championships, which take place form Oct. 21-25. The team will compete in tournament format against players from all Division-I schools in North and South Carolina. The winners of the regionals are then eligible for the ITA National Indoor Championships in Flushing, NY from Nov. 4-7.

Junior Josipa Bek, who won the singles title as a freshman and a sophomore, is ranked #13 in the nation currently, and was a flight-one winner at the Furman Fall Classic in September. She won the regional singles championships in each of the past two seasons, and was the runner-up in doubles in 2009.

Bek and Wong, ranked #5 nationally, are the top overall seed in the regional doubles draw. The pair reached the finals of the ITA All-American Championships last week, and defeated three top-20 teams in that tournament. They will begin play on Thursday at 6:00 pm

Wong is ranked #39 in the nation as a singles player, and advanced to the second round of the qualifying draws at the All-American championships.

Nelly Ciolkowski is ranked #68 in the nation, and also competed at the All-American Championships where she fell, 7-6(4), 7-5 to #22 Mallory Burdette.

Other players that will participate are senior Laurianne Henry, sophomore Carolina Magnusson, and freshmen Maria Belaya.

Henry are Magnusson are paired up in doubles, and are scheduled to play at 5:30 pm Thursday, while the two freshmen will play on Thursday at 1:30 pm against Yasmine Alkema and Sandra Herrera of Winthrop.