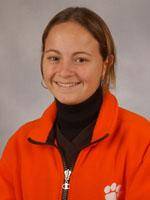 CLEMSON, S.C. – The Clemson women’s tennis team will play host to Virginia Tech and South Alabama in non-conference action this weekend. The Tigers will play the Hokies (10-3) on Friday at 2:30 PM, then face the 14th-ranked Jaguars (8-1) in a 1:00 PM match on Saturday. Both matches will take place at the Hoke Sloan Tennis Center.

Clemson enters the match with a 6-2 overall record and a ranking of #22 in the most recent ITA poll. Both of the Tigers’ losses this season have been to higher-ranked teams. Most recently, Clemson fell to then-sixth-ranked Georgia 6-1 in a match played at the Hoke Sloan Tennis Center. At home, Clemson holds a 6-1 record so far this season. The Tigers’ only other loss this season was a 3-4 defeat to then-#27 South Alabama in a Feb. 3 match in Mobile. In that match, then-31st-ranked Clemson won at number-one and number-three doubles to claim the doubles point, and also claimed the number-one, number-three and number-four singles flights. This weekend, the Tigers will play to avenge that early season loss, and also to even the all-time series record (3-4) with the Jaguars.

Virginia Tech enters this weekend’s match with Clemson with a 10-3 record. The Tigers hold a 4-3 advantage in the all-time series with the Hokies. Clemson is also 4-1 over Virginia Tech at home. The teams most recently met in 2001, when Clemson fell 5-2 to Virginia Tech in Blacksburg.