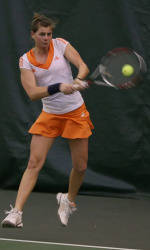 CLEMSON, SC – The Clemson women’s tennis team will play host to the inaugural ITA Kick-Off Weekend this Saturday and Sunday. The 11th-ranked Tigers will take on Boise State on Saturday at 9:00 am in the first match, while Auburn and Louisville will battle at 2:00 pm at the Clemson Indoor Tennis Center.

Clemson enters the weekend with a 2-0 record and with two of the nation’s top-10 singles players. The Tigers defeated the College of Charleston and Virginia Commonwealth last weekend to open the 2009 season. Junior Ani Mijacika, currently ranked #4, improved to 14-3 for the year with a pair of wins at the top flight. Meanwhile, rookie Josipa Bek, who debuted at #10 in her first singles poll, also won both of her singles matches and now owns a 13-3 record for the fall and spring seasons combined.

The winners of Saturday’s matches will play at 2:00 pm on Sunday with the consolation match scheduled to begin at 9:00 am. Admission is free to the general public while fans can also follow the action with live updates on www.clemsontigers.com. A special page has been dedicated to this weekend’s tournament.

This is the first year of the “regional” format for the ITA Indoor Championships with 15 school sites playing host to first and second rounds with the winners, plus Wisconsin, advancing to the round of 16 in Madison, WI from Feb. 13-16. In the past, 16 teams were invited to Wisconsin, where they played a minimum of three matches.

Clemson had made appearances in the 2005, 2007 and 2008 ITA Indoors and earned the invitation four times in history.

The Field Clemson and Boise State have met just one previous time with the Tigers claiming a 5-2 victory over the Broncos in Provo, UT in 2004. Boise State has won its first two matches of the 2009 season and is ranked 41st in the most recent ITA Tennis poll.

Auburn, ranked #26, dropped its season opener on Wednesday at #8 Georgia Tech but boasts the nation’s sixth-ranked singles player in Fani Chifchieva. A match-up between the two Tiger teams would be the 14th in history. Clemson leads the series score by a 9-4 margin.

Louisville also owns a 2-0 record entering the weekend’s action with wins over Morehead State and Michigan State. The Cardinals are listed 39th in the most recent rankings, and a match-up between Louisville and Clemson would be the first all-time.