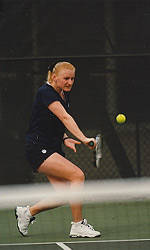 CLEMSON, S.C. – The Clemson women’s tennis team will open its fall season Friday at the 2001 Furman Fall Classic in Greenville, SC. Match play is scheduled to begin at 9:00 a.m. Friday and the tournament will conclude on Sunday at 1:00 p.m.