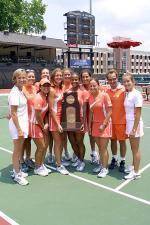 Clemson, SC – The Clemson women’s tennis team will open fall competition at the Furman Fall Classic in Greenville, SC on September 24-26. The Tigers return seven members, including six starters, from the 2004 team that finished fifth in the nation and advanced to the Final Four of the NCAA Tournament. That finish was the best for a Clemson women’s athletic program in school history.

This will be the third consecutive year in which the Tigers have competed at the Furman Fall Classic. Highlights from the 2003 event included returner Richele LeSaldo claiming the flight two doubles title with Karen Rombouts and Julie Coin and Maria Brito finishing as the runners-up in the flight one doubles draw.

Coin will look to lead the Tigers’ 2004-05 campaign after reaching the semifinals of the NCAA Singles Tournament last year. The senior from Amiens, France is ranked fourth in the nation in the Intercollegiate Tennis Association’s preseason singles and doubles rankings released on September 10. She had a 32-9 overall singles record last season and posted 35 wins against eight losses in doubles play. Coin and Brito reached the second round of the 2004 NCAA Doubles Tournament with a 25-6 team record. Brito, a sophomore from Mexico City, is ranked 70th by the ITA in the preseason poll.

The ITA preseason singles rankings list also includes junior Daniela Alvarez at 50 and senior Alix Lacelarie at 117. Alvarez finished the 2004 season with a 25-9 overall record and Lacelarie posted an 11-7 mark last year. The doubles team of Alvarez and Brito is ranked 21st in the nation according to the ITA poll, and the duo of Coin and freshman Romy Farah is listed 29th. Farah, the only newcomer to the Tiger team, comes to Clemson from Cali, Columbia where she was the Columbian Junior National Champion in four different divisions from 1996-2002.