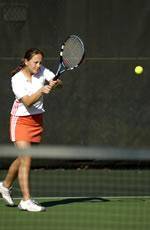 CLEMSON, SC – The 12th-ranked Clemson women’s tennis team will travel to Athens, GA on Wednesday to face second-ranked Georgia. The match is scheduled to begin at 2:30 p.m. and will be held at the Dan Magill Tennis Complex on Georgia’s campus.

The Tigers have posted a 6-1 record so far this season, most recently defeating #36 South Alabama by a score of 5-2 in Mobile. The team’s one loss was a 6-1 decision to sixth-ranked Vanderbilt. Clemson is ranked 12th according to the latest ITA poll released on March 2, dropping one spot from 11th in last week’s poll.

So far this season, the Bulldogs are 8-1 overall and 2-0 in the Southeastern Conference. The team defeated Auburn (7-0) and Alabama (5-2) last weekend to open SEC play. The Bulldogs are currently ranked second according to the latest ITA poll.

Clemson holds a 19-15 series advantage over Georgia. Last season, the then-sixth-ranked Bulldogs defeated the Tigers by a score of 6-1 in Clemson.