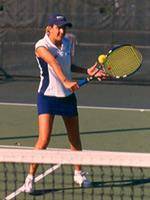 CLEMSON, SC – The 21st-ranked Clemson women’s tennis team will travel to Tallahassee, FL on Sunday to face 30th-ranked Florida State. The match between the Tigers and the Seminoles is scheduled to begin at 12:00 p.m. at the Scott Speicher Tennis Center.

The Tigers, ranked 21st in the latest ITA poll, are 16-3 overall and 5-0 in the Atlantic Coast Conference. The team won a 4-3 decision over 41st-ranked Georgia Tech on Thursday in Atlanta to remain undefeated in conference play. Clemson’s Julie Coin is ranked ninth in the ITA singles poll, while Daniela Alvarez is ranked 63rd in singles. The Tigers’ doubles team of Coin and Maria Brito are 14th and Alvarez and Alix Lacelarie are 17th in the ITA doubles poll.

Clemson is 19-8 in the series against Florida State after posting a 6-1 victory over the Seminoles at home last season. This season, 30th-ranked Florida State is 15-5 overall and 5-1 in the ACC. The Seminoles most recently defeated North Carolina (4-3) and lost to Duke (4-3). Florida State’s Mihaela Moldovan is currently ranked 80th by the ITA in singles.