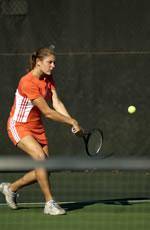 CLEMSON, SC – The Tiger women’s tennis team moved up to sixth in the Intercollegiate Tennis Association poll released on Apr. 27 after being ranked seventh in last week’s poll. The national ranking of sixth ties the highest rank for a Clemson women’s tennis team in 18 years, as the Tigers were also ranked sixth in the poll released on May 13, 1986.

So far this season, Clemson is 22-3 overall, after claiming the ACC Tournament crown with wins over #45 Maryland (4-0), #14 North Carolina (4-1) and #5 Duke (4-2). It was the seventh conference tournament title in history for the Tigers and the first since the 1987 season. The team also finished at the top of the regular season conference standings this season, for the eighth time overall and the first time since 1986, after completing regular season play with a perfect 8-0 record in the league. The Tigers have now won 11 consecutive matches, which is the longest winning streak since the team won the first 11 matches of the 1986 season.

The Tigers’ Julie Coin is ranked sixth nationally according to the ITA singles poll. The junior from Amiens, France was recently named the 2004 ACC Women’s Tennis Player of the Year after compiling a 7-1 record in conference play at the flight one singles position. Coin is 24-7 overall in singles this season and has an 18-4 record in dual match play.

Daniela Alvarez is ranked 70th by the ITA in singles, while Maria Brito is 92nd in the poll. Alvarez, a sophomore from Santa Cruz, Bolivia was named to the 2004 All-ACC team and has a 24-8 overall record, including a 17-5 record in dual matches on the season. Brito, a freshman from Mexico City, Mexico, was also named to the all-conference team, and is currently 28-9 overall and 19-6 in dual singles play.

In the ITA doubles poll, Brito and Coin are ranked 13th with a 24-5 overall record, a 13-2 record in dual match play and a 3-0 conference mark. The Tigers’ pair of Alvarez and Brito is currently 29th in the ITA doubles poll, and has an 8-1 record in dual matches and a 4-1 mark in conference doubles play. Alvarez and senior Alix Lacelarie (Villeneuve-Les-Beziers, France) are ranked 30th by the ITA, after compiling a 7-3 overall record, including a 4-2 mark in dual play and a 3-0 league record.