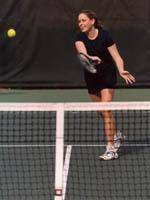 RALEIGH, NC – The 16th-ranked Clemson women’s tennis team defeated Wake Forest by a score of 4-1 in the quarterfinal round of the 2003 ACC Women’s Tennis Championships on Friday afternoon. The match began at the Millbrook Tennis Center in Raleigh, NC, but was completed at the Cone-Kenfield Tennis Center in Chapel Hill after inclement weather forced the teams to move indoors. With the win, the Tigers improve to 18-4, while the Demon Deacons fall to 4-22.

Clemson won two out of three doubles matches to win the doubles point. The Tigers’ 27th-ranked duo of Julie Coin and Laurence Jayet fell to Wake Forest’s Karin Coetzee and Aimee Smith by a score of 8-6 at flight one. At number two doubles, Clemson’s #48 Daniela Alvarez and Alix Lacelarie defeated the Demon Deacons’ Katie Martzolf and Danielle Schwartz by a score of 8-2. Clemson’s Anna Dolinska and Richele LeSaldo won an 8-6 decision over Sandie Knight and Elizabeth Proctor at flight three.

The Tigers will take on the winner of third-seeded North Carolina and sixth-seeded Florida State in the semifinals on Saturday. The match is slated to begin at 1:00 p.m. and will be held at the Millbrook Tennis Center in Raleigh.