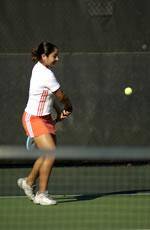 RALEIGH, NC – The ninth-ranked Clemson women’s tennis team defeated 45th-ranked Maryland on Friday morning at the 2004 ACC Women’s Tennis Championships. The top-seeded Tigers defeated the eighth-seeded Terrapins by a score of 4-0 at the tournament, which is being held at the Millbrook Exchange Tennis Center in Raleigh, NC. With the win, Clemson improves to 20-3 on the season, while Maryland falls to 8-12 overall.

The Tigers won two out of three doubles matches to earn the team doubles point. Clemson’s top doubles team of Daniela Alvarez and Maria Brito defeated Maryland’s Ramona But and Emily Marker by a score of 8-5. At flight two doubles, the Tigers’ Julie Coin and Alix Lacelarie won an 8-1 decision over Jennifer Dent and Chloe Chavardes of the Terrapins. Clemson’s Richele LeSaldo and Karen Rombouts dropped their match at number three doubles by a score of 8-4 to Maryland’s Marianne Baker and Neda Mihneva.

In singles play, 84th-ranked Daniela Alvarez defeated Marianne Baker in straight sets (6-3, 6-4) at flight two. The Tigers’ Maria Brito, ranked in a tie for 114th by the ITA in singles, upset 91st-ranked Emily Marker by a score of 6-2, 6-3 at the number four singles position. At flight six, Karen Rombouts was victorious over Neda Mihneva by a score of 6-4, 6-1.

Clemson will face 14th-ranked North Carolina, the tournament’s fourth-seeded team, in the semifinal round of the conference championships on Saturday. The Tigers defeated the Tar Heels by a score of 6-1 in the regular season match between the two teams. The semifinal match between the Clemson and North Carolina is scheduled to begin at 10:00 a.m. at the Millbrook Exchange Tennis Center.