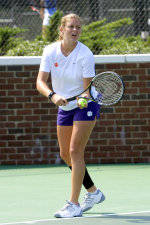 GREENVILLE, SC – The Clemson women’s tennis team opened its 2004 fall season with three titles at the Furman Fall Classic held this weekend in Greenville. The Tigers’ Julie Coin won the flight one singles crown, while Romy Farah claimed the flight four singles title. In doubles play, the tandem of Coin and Farah combined to capture the flight two championship.

At flight one singles, Coin, a senior from Amiens, France, defeated Iowa’s Megan Racette by a score of 6-3, 6-4 in the first round, then topped Wisconsin’s Katie McGaffin by a score of 6-4, 6-2. In the finals, Coin, who is ranked fourth in the ITA pre-season singles rankings, defeated ACC-foe and 13th-ranked Aniela Mojzis of North Carolina by a score of 6-1, 6-1. In doubles action, Coin combined with freshman Romy Farah, a native of Cali, Columbia, to capture the flight two championship. In the first round, 29th-ranked Coin and Farah downed Furman’s Morris and Moore by a score of 8-2, then defeated Katie McGaffigan and Chelsea Nusslock of Wisconsin by a score of 8-3. In the finals, Clemson’s duo earned the flight victory with an 8-0 win over Koon and Miranda Gutierrez of South Carolina.

Daniela Alvarez, ranked 50th in the ITA preseason poll, finished fourth in the flight two singles draw. The junior from Santa Cruz, Bolivia, defeated the University of South Carolina’s Laura Ganzer in straight sets, 6-2, 6-4. North Carolina’s Kendall Cline defeated Alvarex in the semi-finals by a score of 6-4, 6-3 to send Alvarez into a play-off for third place. Alvarez faced Wisconsin’s Caitlin Burke in her final match, falling by a score of 6-1, 6-1.

Romy Farah began her Clemson career/debut with three consecutive wins to capture the flight four singles crown. In the first round, Farah defeated Emily Vest of Middle Tennessee State by a score of 6-1, 6-3, then faced teammate Ioana Paun in the second round. Farah scored a 7-5, 6-0 victory over Paun to advance to the finals, where she kept her record perfect with a 6-3, 7-6(3) win over Caitlin Collins of North Carolina.

Paun claimed a fourth-place finish at flight four singles, falling to Iowa’s Milika Veselinovic by a score of 7-5, 6-1 in her final match of the tournament. In the first round, The senior Tiger from Bucharest, Romania, won a three-set match over Chelsea Nusslock of Wisconsin, 6-2, 4-6, 6-4. Tiger teammate Romy Farah defeated Paun by a score of 7-5, 6-0 in the semi-finals to send Paun into the third-place play-off match.

At flight one doubles, Brito and Alvarez recorded a seventh-place. The Tiger duo lost its first-round match to Bertrand and Fish of Vanderbilt by a score of 8-5. In their second match of the tournament, Brito and Alvarez fell to Furman’s Hagood and Bentley, 8-4. The Tigers’ top doubles team picked up its first win of the year in the seventh-place play-off match, scoring an 8-2 victory over Wisconsin’s Martin and Burke.

The Tiger tennis team will return to action at the ITA All-American tournament to be held in Pacific Palisades, CA, from October 2-10.