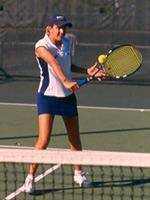 SAN DIEGO, CA – The Clemson women’s tennis team picked up its 11th win of the season with a 7-0 victory over San Diego at the USD West Tennis Courts. With the victory, the 13th-ranked Tigers improve to 11-6 on the season, while the 69th-ranked Toreros fall to 7-7.

The Tigers gained a 1-0 edge after doubles play, picking up wins at flight one and flight three doubles, while narrowly pulling out a win at flight two. Julie Coin and Romy Farah, ranked 36thh in the latest ITA poll, defeated San Diego’s Jenny Brown and Lauren Kazarian at flight one by a score of 8-1. The Tigers picked up another win, securing the doubles point, at flight three as Clemson’s Daniela Alvarez and Ioana Paun downed the Toreros’ Helene Lindstrand and Tara Livesay. At flight two, Clemson’s Maria Brito and Richele LeSaldo fell in a hard-fought match, losing to San Diego’s Emma Murphy and Laren Perl, 9-8 (5).

The Tigers return to action on Thursday, Mar. 22, as they face Sacramento State in an 11:00 AM PST match to be played in San Diego