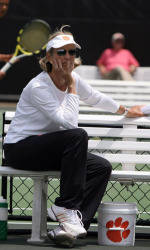 The Tigers will open the fall slate on Sept. 25-27 when they travel to the Furman Fall Classic in Greenville, SC. This individual tournament will pit players from national powers Northwestern, North Carolina, Vanderbilt, South Carolina, Tennessee, Furman, Clemson and Florida State against one another by flight.

The next competition will be the ITA All-American Championships in Pacific Palisades, CA from Oct. 3-11. Ina Hadziselimovic are the second doubles alternate in the 12-team doubles main draw grouping. The two are ranked 14th in the preseason. Keri Wong and Hadziselimovic are also listed as qualifying singles participants.

At the end of October, the team will travel to the Southeast Regional Championships in Winston-Salem, NC, in order to gear up for the ITA National Indoor Championships in Charlottesville, VA from Nov. 6-9.

The dual meet season starts in January as the Tigers host College of Charleston on the 23rd, Virginia Commonwealth in the 24th, and Troy on the 27th. They will then host the first two rounds of the ITA National Team Indoor Championships on Jan. 30-31.

February will send the Tigers to Furman on the 4thand Georgia on the 8th. The Tigers then host Charlotte on Feb. 9 as a tune up for the ITA National Team Indoor Championships, pending qualification in January. The Tigers then travel to South Carolina on the 21st before opening up the conference slate.

The ACC is one of the most difficult conferences for women’s tennis. Duke, whom the Tigers host on April 11, 2010 in a Solid Orange event, are the defending national champions.

Clemson opens the 2010 ACC season on February 24 against Georgia Tech, the 2007 NCAA champions. The Tigers then travel to Miami on the 27th, another perennial top-ten program.

March sees the Tigers host South Florida (Mar. 5) and Florida State (Mar. 7) before traveling to Boca Raton to take on Columbia. The Tigers wrap up the month with home matches against NC State (Mar. 27) and Wake Forest (Mar. 28).

The Tigers travel to Maryland on the 1st of April and Boston College on the 3rd, before retuning home for a huge weekend against North Carolina on the tenth and a Solid Orange home match against Duke on the 11th.

The Tigers wrap up the regular season at Virginia Tech and Virginia before traveling to the ACC Championships in Cary, NC from April 22-25.

The NCAA first and second rounds will take place at host schools on May 14-15. Site winners will travel to Athens, GA for the final 16 from May 20-25. The NCAA singles and doubles championships will take place from May 26-31 in Athens.