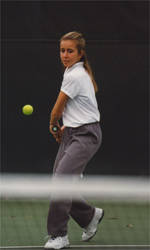 CLEMSON, S.C. – Two members of the Clemson women’s tennis team are scheduled to compete for the Tigers at the Omni Hotels/ITA Southeast Regional on Oct. 24-28. Sophomore Julie Coin and senior Laurence Jayet will compete in the singles and doubles competition at the tournament, which will be held at the Wake Forest Indoor Tennis Center in Winston-Salem, NC.

Coin, the seventh-seeded player in the tournament, is slated to play the fifth-place winner from the qualifying round on Friday morning at 10:30 a.m. Jayet will play Kentucky’s Sarah Witten, the tournament’s number-four seed, on Friday at 8:30 a.m. The pair earned a bye in the first round of doubles competition and will play their first match on Friday at 5:30 p.m. as they take on the winner of North Carolina’s Lee Bairos and Kendall Cline and NC State’s Myrna Bawano and Loni Worsley.

In doubles action, the team won the flight one doubles championship at the Clemson Fall Invitational and finished in fifth-place at the Furman Fall Classic after dropping their first round match to Middle Tennessee’s 10th-ranked team of Manon Kruse and Stacy Varnell.

The winning doubles team, winning singles player and the singles finalist will qualify to play in the Omni Hotels/ITA National Indoor Championships on Nov. 7-10 in Dallas, TX.