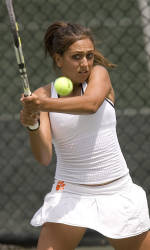 TULSA, OK – Clemson women’s tennis players Ani Mijacika and Carol Salge reached the second round of the NCAA Singles Championships with wins on Wednesday at the Michael T. Case Tennis Center in Tulsa, OK. The duo will also begin competition in the doubles tournament on Thursday.

Mijacika, the #2 seed in the singles tournament, advanced with a straight-set win over 22nd-ranked Anastasia Petukhova of Fresno State. Petukhova held serve for the first game of the match and the two players traded games until Mijacika broke to go ahead, 3-2. The Tiger sophomore recorded another break to win the set, 6-3. Mijacika then easily claimed the second set, 6-1, to finish the match in just over an hour.

She improved to 29-7 on the year and will face #44 Tatsiana Uvarova of Virginia Commonwealth in the round of 32 on Thursday.

Salge rallied for a three-set win over #32 Samantha Murray of Northwestern to extend her winning streak to 12 straight, dating back to Mar. 7. Murray won the first set, 6-4, but Salge rebounded to post the 6-3 victory in the second. With the set tied at 3-3, Salge broke Murray’s serve to take the lead. She then won the next two games to claim the set and match, 6-3.

Salge will face either eighth-seeded Riza Zalameda of UCLA, which won the national championship on Tuesday, or Indiana State’s Jennifer Migan.

The Tiger tandem, seeded fourth in the tournament, will take on #22 Megan Falcon and Mykala Hedberg of LSU in the doubles round of 32.

Live scoring and video coverage of the entire NCAA Championships will available at www.tulsahurricane.com.