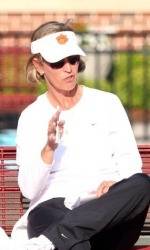 The Clemson women’s tennis team will open their 2010-11 schedule with the flighted Furman Fall Classic from Friday, Sept. 24 until Sunday, Sept. 26. The tournament includes eight teams, seven of whom finished among the nation’s top 27 during the spring 2010 season.

The event is a flighted championship, so there will be not team winner, just individual flight champions in singles and doubles. There are seven seeded singles flights and four doubles flights.

Doubles play will begin at 9 a.m. on Friday, followed by singles action at 1 p.m.  Play will continue on Saturday and Sunday, beginning at 9 a.m. each day.

Clemson (11th), North Carolina (3rd), Northwestern (7th), Tennessee (13th), Florida State (14th), South Carolina (19th), Vanderbilt (27th), and Furman are the eight teams filling out the flights. One player from each team will compete in each flight, and the players will play for an individual flight championship.

The Tigers are familiar with the field, as Clemson played South Carolina, North Carolina, Furman, and Florida State during the spring season, and will add Vanderbilt in the 2011 dual match season.

There are 12 singles players ranked in the preseason ITA Collegiate Tennis singles rankings, and five squads in the doubles rankings. Among them are Clemson juniors Josipa Bek (12th), Keri Wong (39) and sophomore Nelly Ciolkowski (68). The tandem of Bek and Wong is ranked fifth nationally in doubles as well. The highest ranked singles player in the tournament is Northwestern’s Maria Mosolova, who spent last fall ranked in the top spot nationally.

Florida State and Clemson each feature three student-athletes ranked in the top 70 nationally.

This will serve as a tune-up for Bek, Wong, and Ciolkowski, who have received bids to the ITA All-American Championships in Pacific Palisades, CA on Oct. 2-10.