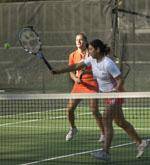 CLEMSON, SC – Three members of the Clemson women’s tennis team are ranked among the top 15 in the Southeast Region, according to the fall rankings released by the ITA. Julie Coin, Daniela Alvarez and Maria Brito each earned individual rankings, while all three Tiger doubles teams are also ranked among the region leaders.

Junior Julie Coin, from Amiens, France, is ranked second in the region in singles after posting a 6-3 record in fall play. She is also ranked third in the region in doubles with Maria Brito (Mexico City, Mexico). The tandem recorded a fall record of 11-3, and became the first Tiger doubles team to win the ITA Southeast Regional Doubles Championship. Brito, a freshman, also holds an individual ranking of 15th in singles after winning nine of her 12 fall matches and advancing to the quarterfinals of the ITA Southeast Regional Championship.

Sophomore Daniela Alavarez, from Santa Cruz, Bolivia, is listed 10th in singles in the fall rankings, and is fifth in the doubles poll with senior Alix Lacelarie. Alvarez was 7-3 in singles in the fall, with wins over three top-100 ranked opponents. She combined with Lacelarie to record a 3-1 record in doubles. The duo defeated two top-30 ranked teams during the fall.

Clemson’s duo of junior Richele LeSaldo (St. Thomas, Barbados) and freshman Karen Rombouts (Huissen, Netherlands) ranks 10th among region leaders. The pair combined for a 6-1 record, with their only loss in the quarterfinals of the ITA Southeast Regional Championships.