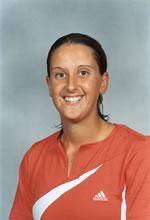 DURHAM, NC – The Clemson women’s tennis team captured the Atlantic Coast Conference regular season title with an upset victory over Duke on Sunday afternoon at the Ambler Tennis Stadium. The 16th-ranked Tigers defeated the fourth-ranked Blue Devils by a score of 5-2 to claim their first regular season championships since 1986 and end the Blue Devils’ 35-match ACC regular season win streak. Overall, this is the eighth ACC regular season title by the Clemson women’s tennis team, and the first under head coach Nancy Harris. Sunday’s victory over the fourth-ranked Duke team is the first win over a top-five team under Harris and the first top-five win for the Tigers since 1988 when rankings were administered throughout the season. Clemson completes its regular season and conference slate with a 19-3 overall record and a perfect 8-0 mark in league play. Duke falls to 17-3 overall and 7-1 in the ACC. The Tigers clinched the top seed in next week’s ACC Championship to be held in Raleigh, NC.

Following Sunday’s win, Clemson head coach Sylvain Malroux, our student assistant coach Laurence Jayet, our recruiting coordinator Stephanie Leggett and the fantastic team members. This is a great moment for Clemson Tiger women’s tennis and for Clemson athletics, and we are looking forward to keeping this going.”

Duke captured the doubles point to begin the match, giving the Blue Devils an early 1-0 advantage. At the number two position, Duke’s duo of Amanda Johnson and Saras Arasu posted an 8-5 win over Clemson’s Julie Coin and Alix Lacelarie. At the top doubles spot, Clemson’s tandem of Daniela Alvarez and Maria Brito dropped a hard-fought 9-7 match to the Blue Devils’ Julia Smith and Tory Zawacki. At the third slot, Duke’s duo of Katie Blaszak and Jennifer Zika slipped past the Tigers’ Richele LeSaldo and Karen Rombouts, winning winning 9-8 (6).

In singles play, Daniela Alvarez knocked off Duke’s Tory Zawacki by a score of 6-4, 6-3 at number two singles, then #114 Maria Brito of Clemson defeated Julia Smith by a score of 4-6, 6-3, 6-0 at number four. The Tigers’ picked up their third point with a 7-6, 6-1 win at six singles, as Karen Rombouts downed Katie Blaszak to give Clemson the lead.

Clemson closed out the match with a 6-3, 4-6, 6-1 victory at the number three singles position as Julie Coin and ninth-ranked Amanda Johnson of Duke battled to a third-set tiebreaker. Johnson captured the first set 7-6, but Coin battled back to capture the second set by a score of 6-0. In the third set, after the Tigers’ clinched the team victory, the match went to a tiebreaker with Johnson leading 5-4. In the tiebreaker, Clemson’s Coin pulled out a 7-5 victory to gain the fifth point for the Tigers.

Clemson will return to action next weekend as the Tigers compete at the ACC Championship in Raleigh, NC, on April 15-18.