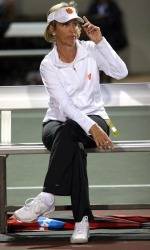 CLEMSON, SC – The Clemson women’s tennis team will play host to NCAA first and second round action for the fifth straight year, earning the 13th overall seed for the 2008 event. The field of 64 was announced on Tuesday afternoon. The Tigers will face Winthrop at the Hoke Sloan Tennis Center in the opening round on Friday, May 9, while Michigan and Furman will also travel to Clemson for NCAA regional competition. Match times will be announced at a later date.

The winner of the Clemson Regional will advance to the NCAA Championships to be held in Tulsa, OK from May 15-20.

The Tigers (15-9) are making their seventh straight appearance in the NCAA Tournament and the ninth overall under Head Coach Hoke Sloan Tennis Center. The Tigers then fell to Cal in the round of 16 in Athens, GA.

The Eagles earned an automatic bid by winning the Big South Tournament, their eighth conference title in the last 10 years. They are sitting at 13-11 for the year. Clemson and Winthrop have just three times in history with the Tigers claiming the victory in each contest. However, the two teams have not faced off since 1979.

Michigan, ranked 19th in the Fila/ITA Tennis poll, finished the year with an overall 18-5 mark. The Wolverines fell to top-ranked Northwestern, 4-0, in the finals of the Big Ten Tournament. A second-round match-up between Michigan and Clemson would be just the third all-time and the first since 1982. The Tigers won both prior contests.

Furman (19-5) was awarded its bid in the NCAA Tournament by winning the Southern Conference Tournament for the fifth consecutive season and 16th overall. The Paladins suffered one of their five losses to the Tigers earlier this year, as Clemson won a 6-1 decision in Greenville, SC on Jan. 29. The Tigers lead the series score by a wide 38-3 margin.