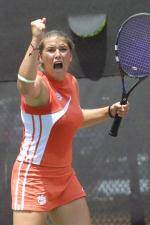 ATHENS, GA – The Clemson women’s tennis team advanced to the Final Four of the 2004 NCAA Women’s Tennis Championships with a 4-3 victory over the University of Washington. With today’s win, the Tigers became the first women’s team in Clemson history to advance to the semi-finals of a NCAA Tournament. The fifth-seeded Tigers came from behind to capture two three-set matches to upset the fourth-seeded Huskies. Clemson improves to 26-3 on the season while Washington ends their 2004 campaign with a 21-6 mark.

In Saturday’s semi-final match, Clemson will face UCLA, who defeated Miami by a score of 4-3 on Friday. Match time on Saturday is set for 11:00 AM at the Dan Magill Tennis Complex on the campus of the University of Georgia. The Bruins enter the Final Four with a 20-7 overall record and as the ninth seed. Clemson is 0-4 in the series against UCLA, dating back to four matches during the 1980-1983 seasons. Both Clemson and UCLA have played and defeated Arizona State and North Carolina and lost to Vanderbilt during the 2004 regular season.

“This is a great day,” said Clemson Head Coach Nancy Harris. “We knew it was going to be a tough match. Our hats are off to Washington. There were a couple of point where we thought the match was going to end, but we have watched this team fight to come from behind several times this season and today was just another example of that. This is one of the ultimate highs in my career. The most important thing is to never, ever give up. Anyone who has ever played a champion knows that they can always come from behind and today I think we proved we are champions.”

The Tigers once again captured the early lead, winning the doubles point with victories at flights two and three. This is the 26th match in which Clemson has won the doubles point, and the Tigers are 6-0 in tournament play behind the crucial doubles point victories. Clemson’s flight three tandem of Richele LeSaldo and Karen Rombouts defeated Washington’s Monika Kolbovic and Stephanie Svandfeldt by a score of 8-4 to secure their sixth consecutive doubles victory. The Tigers secured the first point of the match with an 8-5 decision at flight two, as Julie Coin and Alix Lacelarie of Clemson defeated Erin Hoe and Dinka Hadzic. When play was called, the Tigers’ top duo of Daniela Alvarez and Maria Brito was leading Washington’s 10th-ranked team of Claire Carter and Dea Sumantri by a score of 7-6.

In singles, Washington’s Stephanie Svandfeldt defeated Clemson’s Karen Rombouts by a score of 6-3, 6-2 to even the match score at 1-1. Clemson took a 2-1 lead with Julie Coin dropped the first set by a score of 6-4 to Washington’s Claire Carter, then rebounded to capture the second set by a score of 6-4. Coin easily handled Carter in the third set, 6-1, to once again even the match score at three points each. Coin said, “At the end of the first set, I said to myself ‘I am not going to lose today’. At that point, the pressure was on Washington and I had nothing to lose because I was down. My opponent played very well in the first set, but then she started to get tired and I got used to her game and that made the difference.”

In the decisive match of the day, Ioana Paun prevailed in a three-set thriller to give Clemson its first appearance in the Final Four. Paun lost the first set to the Huskies’ Saskia Nauenberg by a score of 6-2, then rallied to win the second set by a score of 6-3. Paun led in the final set by a score of 5-3, but Washington’s Nauenberg fought back to even the score at 5-5. Paun won the 11th game to take a 6-5 lead, before Nauenberg knotted the score at 6-6, sending the match to a tiebreaker. In the tiebreaker, Paun prevailed by a score of 7-3 to capture the final match point. Following her victory, Paun said, “I put so much pressure on myself to win at 5-3, that when Saskia came back (to tie the set score), I just relaxed and went out there and fought. The team stayed together and fought to the end. Everyone was cheering for each other and that gave me strength. We are a team and we love each other.”