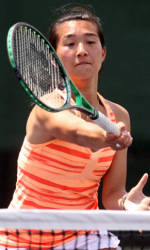 CLEMSON, SC – The 22nd-ranked Clemson women’s tennis team will begin play at the 2012 ACC Tennis Tournament at the Cary Tennis Complex on Friday in Cary, NC. Clemson, the No. 4 seed in the tournament after compiling an 8-3 mark during the conference season, will play five-seed Virginia, who defeated 12-seed Wake Forest, 4-0, on Thursday. The Tigers and Virginia will meet in the quarterfinals at 9:00 am on Friday morning. The Tigers, who stand at 15-8 overall, have won in four in a row and six of their final eight to close the season, with a 6-1 win at Virginia (Romy Kölzer (16-8) also have winning record for Clemson, while senior Josipa Bek has won four in a row. A key to Clemson’s late success has been the doubles play. The Tigers are 12-3 this season when winning the doubles point, and 6-0 in ACC play. Clemson used the same combinations for all 11 ACC matches, with No. 12 Bek and Wong at the top. The No. 2 slot has gone to the freshmen, Gumulya and Kölzer, and the third spot belongs to Vyskocilova and Monika Kochanova, who are 23-5 on the season. Following the ACC Tournament, Clemson will await word on the NCAA Tournament, which begins on May 11 at campus sites, with the Sweet 16 taking place in Athens, GA.