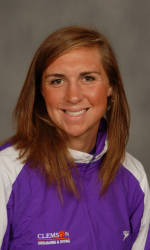 COLLEGE STATION, TX – Five members of the Clemson women’s swimming team will travel to College Station, TX for the NCAA Championships. The event will take place from March 19-21 at the Student Rec Center Natatorium on the campus of Texas A&M. The Tigers were selected as at-large candidates after their time of 1:29.70 in the 200 free relay placed 16th nationally.

The Tigers’ 200 free relay group of Rachel Regone, Lauren Sindall, Alex Allen, and Michelle Parkhurst finished second in the ACC this season and set the school record at the ACC championships.

The four relay swimmers will be joined by freshman Kelli Kyle, who will compete in the 100 backstroke after posting a 53.58 during the ACC championships. She was originally listed as an alternate, but was selected to go late Monday afternoon.

Parkhurst, a senior, earned honorable mention All-America status last season in the 200 freestyle, where she finished 16th. She is a two-time ACC champion in the event and the ACC record-holder. She will also compete in the 200 back, in which she placed second in the ACC with a career-best 1:54.21, also a school record.

Lauren Sindall and Alex Allen rank second and third all-time in the 50 free, respectively. Sindall’s career-best of 22.60 and Allen’s best of 22.98 came during the 2009 ACC Championships.

All schedules, results, and championship information can be found using the link above.