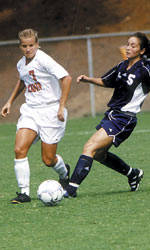 Clemson Women’s Soccer To Host College Of Charleston On Tuesday

Clemson, SC — The 12th-ranked Clemson women’s soccer team will host the College of Charleston on Tuesday night at 7:00PM at Historic Riggs Field. The Lady Tigers have won four straight matches and enter Tuesday’s contest with a 12-3 overall record. The College of Charleston is 6-8-1 overall and is coming off a 4-1 win over Wofford on Sunday afternoon. The match will be the first meeting between the two schools in women’s soccer.

Sophomore Lindsay Browne, a current nominee for National Player of the Year by the Missouri Athletic Club, leads the Lady Tigers with nine goals and seven assists for 25 points. Junior Deliah Arrington and freshman Paige Ledford are tied for second on the team with 19 points. In goal for the Lady Tigers, senior Katie Carson has posted seven shutouts and has a 0.84 goal’s against average this season.