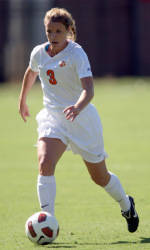 CLEMSON, SC – The Clemson women’s soccer team will meet two teams that are ranked in the top 11 in the nation on the road this week. The Tigers will travel to College Park, MD on Thursday to face sixth-ranked Maryland at 7:00 PM at Ludwig Field. The team will then head to Chestnut Hill, MA to take on #11 Boston College on Sunday at 1:00 PM at the Newton Campus Soccer Field.

The Tigers are 5-8 overall (0-5 ACC) after falling to #9 Florida State and #18 Duke on the road last week. Sophomore forward Jackie Dutton is second on the team in scoring with two goals and one assist for five points. Three freshmen, Hailey Karg, Vanessa Laxgang and Maggie Murphy, have four points apiece to tie for third in scoring.

Lauren Arnold has posted 63 saves in 1,061 minutes in goal for the Tigers. The freshman ranks first among all Atlantic Coast Conference goalkeepers in saves per game (5.25) and her 63 saves place her second among league keepers in that category.

Sixth-ranked Maryland has an 11-1-1 overall record and a 3-1-1 record in conference play. The Terrapins defeated Boston College and N.C. State on the road last week. Junior forward Ashley Grove leads Maryland in scoring with seven goals and five assists for 19 points. Redshirt junior keeper Yewande Balogun has posted 32 saves in 1,151 minutes in goal for the Terrapins.

Clemson has an 8-11-1 all-time record in the series against Maryland, which dates back to the 1994 season. The Terrapins have won the two previous meetings in the series, including a 1-0 victory in 2008, which was the last time the two teams met in College Park.

Boston College, ranked 11th in the most recent NSCAA poll, is 9-3-1 overall and 2-3 in the ACC. The Eagles fell to Maryland and Virginia Tech in Chestnut Hill, MA last week. Sophomore forward Victoria DiMartino leads the Eagles, and also the ACC, in scoring with 28 points (11 goals, six assists). Junior Jillian Mastroianni has recorded 55 saves in 1,164 minutes in goal for Boston College.

The Tigers are 1-4-1 overall against Boston College, in the series in which the first game was played in 2005. The Eagles have won two in a row, including a 1-0 win two seasons ago when the teams last met in Chestnut Hill, MA.