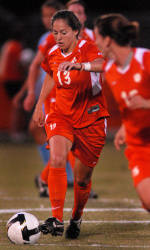 CLEMSON, SC – The Clemson women’s soccer team will open the 2009 regular season on Saturday evening as it plays host to Wofford. The game between the Tigers and the Terriers is scheduled to begin at 6:00 PM at Historic Riggs Field.

Clemson returns 16 of 20 letterwinners including eight starters from the 2008 squad. Second-year head coach Hershey Strosberg has also added 10 newcomers to the 2009 roster. Franklin (Frederick, MD) and sophomores Cort (Wellesley, MA) and Paula Pritzen (Houston, TX) returns for her junior campaign, having recorded 93 saves in over 1500 minutes in goal in 2008.

This will be the sixth meeting between Clemson and Wofford on the soccer field, with the Tigers having won the previous five contests. Most recently, Clemson defeated the Terriers by a score of 8-0 on September 23, 2007. The Tigers have a 14-1 all-time record in season opening games.