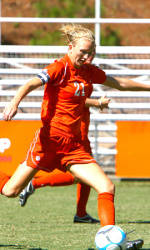 CLEMSON, SC – The Clemson women’s soccer team will play host to Virginia Tech on Thursday, October 2. The contest between the Tigers and the Hokies is scheduled to begin at 7:00 p.m. at Riggs Field. The game will be broadcast live on the internet via ACC Select and can be viewed by clicking on the link below.

The Tigers are 4-4 overall and 0-1 in the Atlantic Coast Conference after falling to third-ranked North Carolina 5-2 last Thursday at Riggs Field. Senior forward Julie Bolt leads Clemson in scoring with eight goals for 16 points on the season. Freshman Tara Cort has two goals and three assists for seven points and sophomore Judea Davis has three goals for six points to rank second and third in scoring, respectively. Sophomore Paula Pritzen has recorded 29 saves in 655 minutes in goal for the Tigers.

The Hokies are 5-4-1 overall and 0-1-1 in conference play, most recently falling to #8 Florida State by a score of 3-1 in Tallahassee. Junior Emily Jukich has 16 points (eight goals) and sophomore Marika Gray has 10 points (four goals, two assists) to lead Virginia Tech in scoring. Two goalkeepers, freshman Kristin Carden and senior Ashley Owens, have combined to record 39 saves on the season for the Hokies.

This will be the fifth meeting between Clemson and Virginia Tech, and the Tigers hold a 2-0-2 advantage in the series and a 1-0 advantage in games played at Riggs Field. The previous two meetings between the teams (in 2006 and 2007) were played in Blacksburg, VA with both contests ending in double-overtime ties.