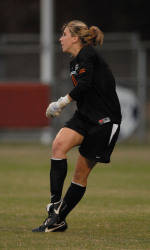 CLEMSON, SC – The Clemson women’s soccer team will play host to the Carolina’s Cup this weekend at Historic Riggs Field. The Tigers will face 18th-ranked South Carolina on Friday, September 11 at 7:30 PM and will take on Furman on Sunday, September 13 at 2:30 PM. Friday’s game against the Gamecocks will be broadcast live on www.clemsontigers.com via TigerCast.

The Tigers are 2-2 so far this season, most recently defeating Florida Atlantic (4-0) and falling to Alabama-Birmingham (2-3) in the Georgia Nike Invitational in Athens, GA last weekend. Freshman forward Callie Cavanaugh has one goal and one assist to rank second on the team in scoring. Junior Paula Pritzen has posted 12 saves in four games in goal for the Tigers and has recorded two solo shutouts.

South Carolina is 4-0 on the season and is currently ranked 18th nationally by the NSCAA. Last weekend, the Gamecocks defeated Louisville (3-0) and Cincinnati (4-0) in Louisville, KY. Two players, sophomore Kayla Grimsley and senior Kim Miller, are tied for the team lead in scoring with seven points apiece. Redshirt junior goalkeeper Mollie Patton has not allowed a goal and has 12 saves in the Gamecocks’ first four games.

Clemson leads the overall series against the Gamecocks with a 10-4 record. In 2008, South Carolina defeated the Tigers in Columbia by a score of 1-0. The previous four games in the series have all been 1-0 victories for the home team.

The Lady Paladins have a 5-0 record for the 2009 campaign, most recently defeating UNC Asheville by a score of 2-1 on Wednesday afternoon in Asheville, NC. Furman is led by sophomore forward Martha Hall, who has scored seven goals for 14 points on the season. Sophomore goalkeeper Jessica Smith has nine saves and has given up four goals in the Lady Paladins’ five games.

The Tigers have an 11-1-1 advantage all-time against Furman. The Lady Paladins notched their first win in the series in 2008, a 2-1 victory in Greenville, SC.