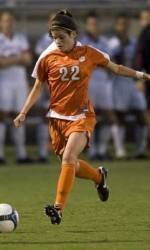 CLEMSON, SC – The Clemson women’s soccer team will play host to Presbyterian College on Sunday afternoon at Historic Riggs Field. The Tigers will face the Blue Hose at 12:00 PM.

The Tigers are 2-5 on the 2009 season, most recently falling to 15th-ranked Georgia by a score of 2-1 on Friday night in Clemson. Freshman forward Callie Cavanaugh has one goal and one assist to rank second on the team in scoring. Junior Paula Pritzen has posted 28 saves in seven games in goal for the Tigers.

PC has a 3-4 record so far in 2009. The Blue Hose defeated Wofford by a score of 1-0 on Thursday night in Clinton, SC. PC is led in scoring by junior midfielder Emily Davis with two goals and one assist for five points on the season. Goalkeepers Abby Young and Sara Beth Anderson have 18 saves apiece in PC’s seven games.

Clemson and PC met for the first time in women’s soccer in 2008. The game was a 3-0 victory for the Tigers at Historic Riggs Field.